Former Reggae Girl in Hall of Fame at US college 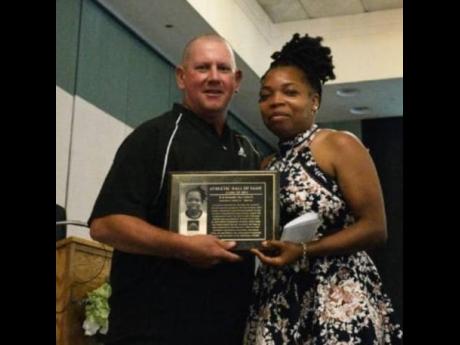 Falconer, who joins Tyrone Marshall in the school’s soccer pantheon, represented Maverley and Barbican in the local women’s league before acquiring a scholarship to the United States-based college.

However, she said looking back, she never believed that football would have taken her to where she is now in life, and being recognised for her contribution to the school is the highest honour.

“It is one of the greatest feelings. You could call this the PhD of football honours at the college level in America. It is a great feeling and words can’t explain, and where I am coming from and to achieve this was never easy,” she told The Gleaner.

In her freshman year, she helped Lindsay Wilson to the final before winning the championship in her sophomore and senior years.

In her senior year (2006), she scored 16 goals, four being game-winners and one game-tying goal in the semi-finals of the national tournament.

“That (senior year) was when I really took it to another level. I was the league MVP, tournament MVP, all-American and mid-Conference Player of the Year and the National Association of Intercollegiate Athletics Player of the Year,” she revealed.

Falconer ended her career as the school’s most capped player with 99 appearances and third in career points (129).

“Because I have contributed to the programme very significantly, winning the first two championships in the history of the school and was even captain, so it (Hall of Fame induction) was a well-deserved one,” she commented.

DID NOT COME NATURALLY

Falconer grew up close to Waterhouse, but football didn’t come naturally to her.

Her mother passed away when she was nine, and with less supervision, she began roaming the streets with an older brother who frequented the football field in the community, and soon, she began playing with them.

“So football found me in a sense. I could not control or do anything well. I just used to play. But kids in Jamaica play morning, noon, and night, and eventually, my skills developed,” she recalled.

At about age 11, she made the Maverley team but soon lost her father, too, and with only their grandmother to care for her, things got extremely tough.

“Basic human needs were short, such as shelter, clothing, food, and safety. That was all gone when my parents passed away. So to come out to be a hall of famer is something unexpected,” she noted.

Falconer’s life-changing moment came when she was invited by Charles Edwards to travel with the Barbican team for a tournament in the Cayman Islands.

While playing that tournament, she was spotted by the president of Lindsay Wilson, who was there on vacation, and he granted her a scholarship.

She returned to Jamaica, where she played a season with Barbican before moving abroad to create history at her new school.

Falconer, who last played for the senior Reggae Girlz in 2007, holds a degree in human services and became more involved in her profession as a counsellor. She played semi-professionally for FC Indiana for a season, but playing competitively was, basically, over for her after 2008.

“There was no football for the senior girls (in Jamaica), and as time passed, age caught up, and I just never looked back. So that is where my career, basically, went after 2007.

“Sometimes life itself steers you in a different direction, and I have been in the counselling field working with kids,” she disclosed.

Nevertheless, she wants young aspiring female footballers to use her journey as a motivation to achieve their football ambitions.

“I broke a lot of barriers, raised expectations, and made the impossible possible. Despite my adversities and obstacles, I overcome all of that, and to receive such a high honour for my contribution, I hope people in a similar situations realise that it is never too late and there’s always a chance to do great things with their talent and skills,” she said.