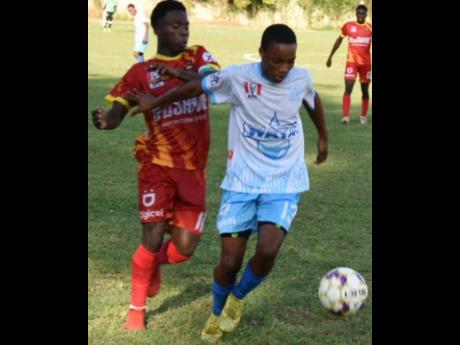 With 12-time champions Cornwall College floundering this season, Zone A is certainly up for grabs in the ISSA/Digicel daCosta Cup football competition, much to the delight of zone leaders Irwin High School, who will travel to Maldon High School to do battle in difficult conditions this afternoon.

With four wins and a draw, Irwin sit top of the zone with 13 points. They are followed by Green Pond High with 10 points.

Maldon, who lost their first game of the season, are loving life as of late, being more equipped to play in the difficult conditions brought on by bad weather over the past week. They have won their last two game games after a draw in their second. Just last Friday, at home, they clipped Cornwall College 2-1 to move into third in the six-team zone.

Former champions Cornwall College and St James High occupy fourth and fifth, respectively, with six points each. Anchovy High are yet to get off the mark.

Irwin High's coach, Norman Foster, said while Maldon are a tougher team to play on their home ground, his team is equipped to deal with anything.

"Playing at Maldon will always be a difficult task because of the weather conditions up there. If we can play a good match, it will be a good day for us. Our preparation is up to par for anything, but, hopefully, the day will be fair so we can have a good game.

"It can be tough, but at the end of the day, I have to focus on my team. Whatever conditions we have to play in we have to stick to the task and fight. We are equipped and ready for the game," he added.

Coach of Maldon, Dillon Thelwell, said they are upbeat, as playing at home gives them confidence, especially after Friday's result against Cornwall College.

"Irwin are a good team, I've seen them three times now, so we know it's not going to be easy. However, we will be at home; so once the guys carry out the instructions, I know we can deliver. We just have to be strong mentally, because we are prepared," said Thelwell, who attempted to dismiss claims of the conditions created by the weather giving them an advantage.

"We cannot stop the rain from falling. We pray at times for no rain so we will have a good field to play on," he added.

May Day vs Belair - May Day playfield