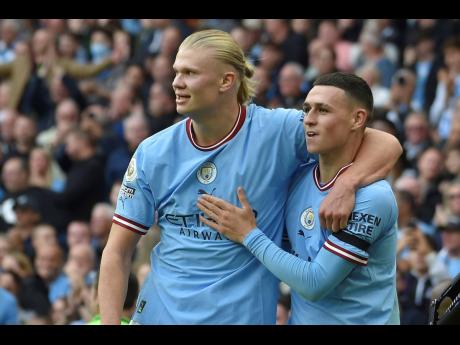 So complete was the humiliation of Erik ten Hag’s first Manchester derby that he chose to protect Cristiano Ronaldo from enduring the shame of being associated with such a performance.

A 6-3 defeat to Manchester City at the Etihad yesterday flattered United, with substitute Anthony Martial firing twice late on to add a modicum of respectability to the score.

But it could not disguise the total dominance of Pep Guardiola’s Premier League champions, or Erling Haaland’s status as arguably the most fearsome forward in world football.

What a contrast between the Norwegian – who scored his third hat-trick of the season – and Ronaldo, who watched on from the sidelines.

Ten Hag was scathing in his criticism of his team and revealed he opted against bringing on his 37-year-old striker in order to protect the player’s reputation.

“I wouldn’t bring him in because we are 4-1 down,” said the United manager. “Out of respect for Cristiano, for his big career.”

Ten Hag made no attempt to protect his other players, who were 4-0 down at half-time and trailing 6-1 before Martial’s late double, with Phil Foden also hitting a hat-trick.

“The plan was to show bravery and confidence, but we didn’t from the first minute,” Ten Hag said. “We left Haaland and we were not tight.

“For the first goal we won the ball and could have created a great chance, but instead we gave it easily away, and then it was like a pack of cards.

“We are in the process and I knew before that big teams like City, when you are not good you get hammered, and we were not good.”

Foden struck after just eight minutes and then again on the stroke of the interval, with Haaland scoring twice in-between.

Antony scored a wonderful goal from distance after 56 minutes, but City were soon back on top, with Haaland completing his treble and then setting up Foden to do likewise.

Martial’s goals – the second coming from the penalty spot – made it the highest-ever scoring game between the rivals.

Guardiola, meanwhile, is running out of words to praise his unstoppable centre forward, who now has 17 goals in 11 games for City – and scored his third hat-trick in successive home league games.

“Of course, the quality we have alongside him helps him to score goals,” Guardiola said. “But what he has done, I didn’t teach him once.

“When the ball is right, and he attacks the box, how he moves behind the central defender away from the action, he has incredible instincts that the ball will arrive there and it comes from his mum and dad. He was born with that.”

But Guardiola warned the Norway international that there is still improvements to be made to his game.

“He said, ‘I prefer to touch the ball five times and score five goals.’ I don’t like that,” said the City manager. “I want him to touch the ball more and more. I like that he’s more part of the situations, but don’t forget his biggest talent is to put the ball in the net.”