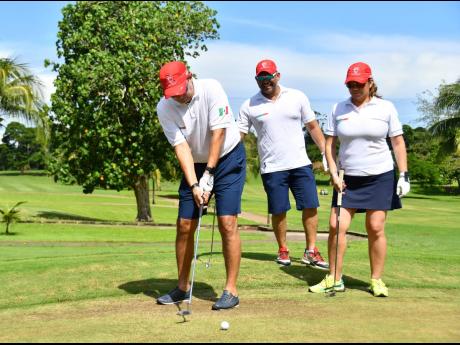 Mexico and Panama, fielding eight and 14 players, respectively, have the biggest contingents among the 19 teams that teed off yesterday in the four-man scramble.

Though Colombia’s Team Seven are two strokes off the lead, the pendulum could swing any way among the top four in the annual tournament, one of three staged annually by Sandals to showcase Jamaica as a golfing destination.

In the recent United States tournament, Team 6 rallied on the final day to card a turkey, scoring three consecutive birdies for an exciting one-stroke victory over Team 20, joint first-day leaders.

Apart from showcasing their golfing skills, the Latin American travel advisers are brimming with anticipation ahead of today’s handover of school supplies, an annual affair, which Arlenes Garcia, director, sales and marketing, Unique Vacations, said is the highlight of their stay in Jamaica.

“Every agent brings something for the kids at schools in and around the community of the golf course,” she pointed out.

“Supporting the Sandals Foundation and what it does for the children means a lot to the agents,” she added.