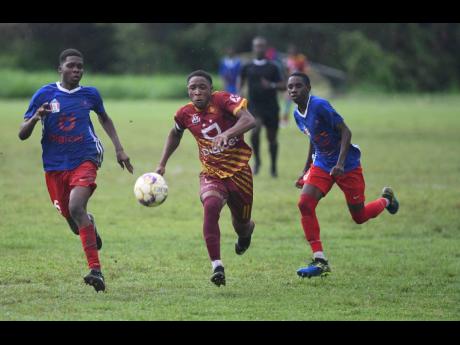 With one eye on their rescheduled Group F top-of-the-table clash with Campion College, leaders Excelsior High will hope that they can maintain their advantage as group leaders when they face Cumberland High School in an ISSA/Digicel Manning Cup fixture this afternoon at the 3:30.

The Mountain View Avenue-based Excelsior currently hold the top spot in the group with 13 points, two ahead of their nearest challengers Campion College who are on 11 points with both teams having five-game unbeaten streaks. In the case of Excelsior, their form has been impressive, winning four out of their last five and scoring 13 goals so far in the competition.

Excelsior’s momentum slowed last Thursday after their game with Campion was halted because of lightning. They went on to defeat Kingston Technical 2-1 on Saturday. Meanwhile, Cumberland have struggled so far this season and have gone winless in their last five games including a 5-1 drubbing by Jose Marti on Saturday. They are currently in fifth place with four points, seven points away from second place. Cumberland have only scored four goals so far this season, the least number of goals in the group, and have conceded 17, the most in the group.

Second-place Campion College will face Jose Marti High looking to extend their unbeaten run to six games and keep pace in the hunt for first place in the group. Both Campion and Excelsior are set to conclude their aborted encounter on Thursday at 3 p.m. Both teams were deadlocked at 0-0 before lightning and heavy rain stopped proceedings in the 74th minute. According to ISSA, only the final 16 minutes plus injury time will be played on Thursday.