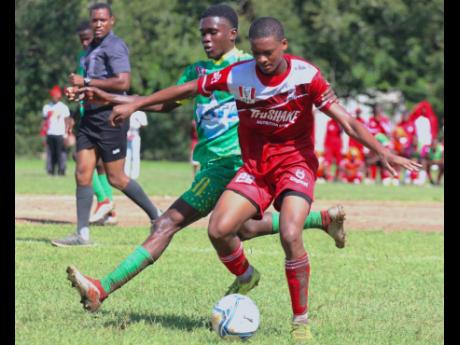 Glenmuir High featured in just their third match of the ISSA/Digicel daCosta Cup season yesterday and the Clarendon-based side comfortably maintained their perfect record in Zone M following a 2-0 win over Old Harbour High at Port Esquivel.

The win for the Andrew Peart-coached Glenmuir outfit now sees them atop the group on goal difference with nine points, the same as Old Harbour and Central High who have played five and four games each, respectively.

Following their two-week inactivity, Glenmuir took a while to settle on the wet and sloppy Port Esquivel surface and most of the action took place in the middle of the field.

The winners’ first genuine attempt on target eventually turned out to be the game’s opening goal. A long-range right-sided free kick from Brandon Wallace floated to goalkeeper Kristoff Johnson, who made a meal of a catch and the ball slipped through his hands and into the net in the 45th minute.

Glenmuir continued to press in the second half in a bid to double their lead. They were rewarded in the 64th minute when Deandre Johnson picked up a left-sided pass inside the area and unleashed a powerful right-footed shot which flew past substitute goalkeeper Jahiem Hall.

With a comfortable lead, Glenmuir took their foot off the gas, allowing Old Harbour to come up with a couple of chances of their own, but substitute Nelford Blackwood failed to trouble the Glenmuir goalkeeper.

“It’s a good win for us as we managed the game very well. Seeing that this is our third game of the season after a couple of weeks of inactivity, it was a mature performance from the boys.”

Old Harbour coach Dwight Whyte lamented the absence of his inspirational player Shyjah Orridge who has migrated to England. This, he said, contributed to the team’s tame display.

“The last game we put away our chances and we got similar chances today, but we were unlucky in front of goal,” Whyte said.