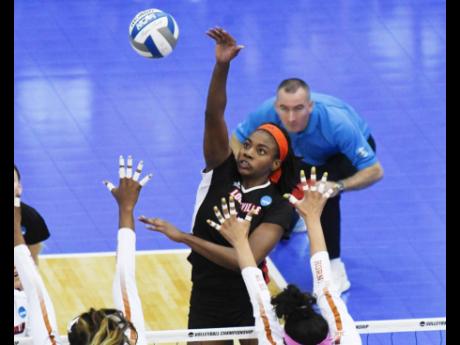 With Jamaican Aiko Jones making a sterling contribution, the University of Louisville surged forward in its defence of the Atlantic Coast Conference (ACC) volleyball title on the weekend. Louisville smashed visiting Clemson University on Friday and then fought past a stubborn Georgia Tech outfit on Sunday. Across both matches, Jones fired in 22 spikes to help the Louisville cause.

The six-foot two-inch tall Jamaica redshirt senior started the weekend with 10 kills, an ace and two blocks and one dig, and her all-round performance helped the home team to a 25-22, 25-19, 25-20 win over Clemson. Louisville lost the first set on Sunday to a belligerent Georgia Tech unit, but fought back to extend their unbeaten conference run to 33 straight matches. In the end, the number two-ranked University of Louisville team defeated No. 11 Georgia Tech 22-25, 25-14, 24-21, 25-21.

In this encounter, Jones poured in 12 kills and hurt the visitors with seven blocks.

The former Wolmer’s Girls captain formed a potent combination with Claire Chaussee, who led Louisville with 16 kills against Georgia Tech and 19 more against Clemson.

Last weekend, Jones and her teammates went on the road and swept aside both the University of Miami and Florida State University in their first two ACC assignments.

She gained international experience playing for Jamaica at the 2017 Caribbean Senior Championships and is part of a seasoned unit which includes three seniors, two graduate students and several third-year players. Head coach Dani Busboom Kelly believes their accumulated experience is a plus. “We have the players that are familiar with our programme, and then we have players who know what it takes. So, the mentality part, it kind of comes along with experience and age, so it definitely makes it a little bit easier at my end,” Kelly said.

In addition to being a star on the court, the Jamaican was named to the All-ACC Academic team, the ACC Honour Roll and the Athletic Director’s Honour Roll.

Louisville will be back on the road on Friday and next Sunday with matches to be played against Boston College, the school which granted legendary Herb McKenley a track scholarship 80 years ago in September 1942, and Syracuse University in New York on Sunday.