St George's turn the tables on Waterford, come away 3-0 winners 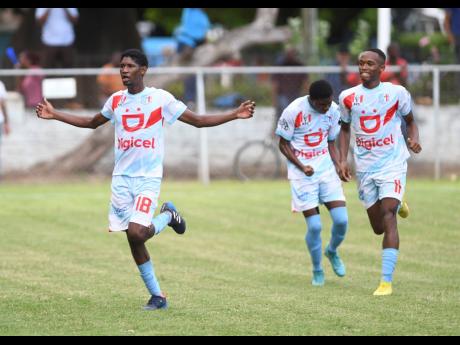 VENGEANCE WASN'T at the forefront of the mind of St George's College assistant coach Marcel Gayle in their return game against Waterford High.

Still, the ‘Light Blues’ got retribution for a 3-2 defeat in a 3-0 victory in their ISSA/Digicel Manning Cup Group A clash at Winchester Park yesterday.

St George's used a second-half surge to overpower their opponents, thanks to goals from Tae-Sean Oneil in the 57th minute, Brian Burkett, in the 68th, and Adrian Reid, in the 84th.

While the desire to win from the players led to uneasiness, according to Gayle, he credited the second-half adjustments which turned the tide and kept them in charge of the run of play.

"It's not sweet revenge. I think St George's is a good team. We were just unfortunate in the first game. We knew that we have quality. We knew that if we put the ball on the ground and pass it around we would have gotten success, which we did," Gayle said.

"It puts us right back into contention but we want to focus most of all on our performance individually and collectively as a team."

The criticism from Gayle from their first game in Portmore on September 21 was that they were not clinical, despite the many opportunities they created.

Gayle’s focus on the way the team played does not mean he is not aware of how important the result was to their chances of getting out of a difficult group.

"In the second half, we turned up. Waterford clogged the middle and were staying behind the ball. So we would have employed the goalside and the flank. And we got some reward from that."

Waterford head coach Kevin Reid said that the injury to their first-choice goalkeeper Alphanso Salmon as well as other key players put them at a disadvantage.

"Coming to (Winchester Park), it will never be an easy game. But we lost concentration, we lost focus in the second half and we paid for it," Reid said.

"Our second-string goalkeeper is inexperienced and so coming into a game like this it is going to get the better of him. Mentally he was not prepared."

St George's move to second place with 12 points three points away from leaders Kingston College who are on 15 points after their 7-0 win over Meadowbrook. Waterford move down to third with 10 points.