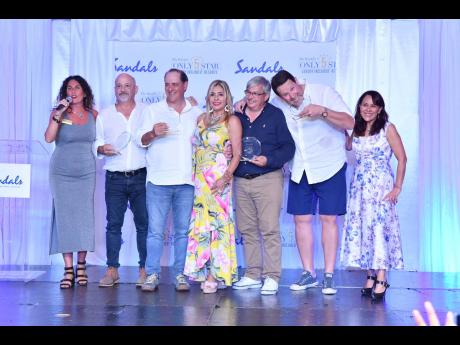 STOKED BY the lively national ‘rivalries’ among the 19 teams which participated in the eighth Annual Sandals Latin American Travel Advisors Golf Tournament, which spilled over into cross-table chants at Monday night’s awards ceremony, tournament director, Jake Coldiron, plans to ramp up the ante at next year’s staging with a slight change of the final-day format.

Uruguay, who led Sunday’s first day’s play by one stroke with a recalculated score of 35 over nine holes in the four-man scramble, also topped the leaderboard on Monday with 33, ending the 18-hole contest three under par at Sandals Golf and Country Club’s picturesque Upton, St Mary, course.

Posing for the cameras, the elated quartet bit their crystal trophies in Olympic fashion while the cheers from the crowd of ‘Pa-na-ma’ and ‘Mekico’, by the first and second runners-up, was a eureka moment for Coldiron, national manager, golf sales, Unique Vacations.

Coldiron revealed that he intends to further spice up what he described as an “enthusiastic” group of travel advisers, who are in the island experiencing Jamaica as a golfing destination, by having the stronger teams go head-to-head on the final day.

Experiencing his first Latin American tournament, Coldiron, an avid golfer, acknowledged that most of the players were new to the sport but enjoyed themselves in their various national colours, an atmosphere he hoped they would use to help promote Jamaica to clients in their respective countries.

“The big difference with the Latin American group is their energy and enthusiasm,” said Coldiron, a former player with the United States group before being recently promoted to head golf sales.

“It’s not like the United States or Canadian tournaments. They are from 19 different countries and are used to seeing each other here, which was disrupted by the pandemic. They haven’t seen each other since 2019 and are really happy to be back here,” he added.

The tournament coincided with the 40th Caribbean Hotel and Tourism Association’s Caribbean Travel Marketplace in San Juan, Puerto Rico, October 3-5, at which Jamaica’s tourism minister, Edmund Bartlett, said the sector has led the island’s economic recovery, earning nearly US$5.7 billion since the country reopened its borders in June 2020.