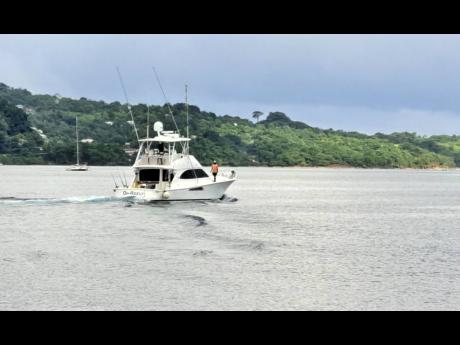 Gareth Davis Sr
A boat venturing out to sea at the start of the 2022 Mayberry Superstars Blue Marlin tournament in Port Antonio yesterday.

When the 13 boats sailed out from the Errol Flynn Marina in Port Antonio yesterday, anglers on the respective fishing vessels were clearly focusing on one thing, and that is to catch a 600lb Blue Marlin, which would enable them to win the US$100,000 top prize.

Among those who sailed out yesterday at the start of the 2022 Mayberry Port Antonio Superstars Blue Marlin tournament were four entries from the Cayman Islands. The tourney was delayed for a week due to the passage of then Tropical Storm Ian. The approaching storm and the subsequent delay forced more than ten boats to pull out as the rescheduled tournament affected prior engagements and obligations.

“Yes, we were forced to push back the tournament based on the many bulletins from the Met Office. But of course, it was necessary, as we had to play it safe, “ organiser of the Blue Marlin tournament, Robert “Bobby” Stewart, said.

“But we are happy to be in Port Antonio, and although we now have 13 boats, the anglers are upbeat, and I am sure that we will not only have a wonderful tournament but also a successful one. Once again, a big shout-out to all our sponsors including Mayberry Investments, who continue to lead the charge.

“Everyone is excited, including the anglers, who I know will be participating in three gruelling days of competition in friendly rivalry, especially in their quest to catch a 600lb marlin for the top prize of US$100,000 for the record catch. The heaviest catch on record for a landed Blue Marlin is 597 pounds, “he added.

The Mayberry Superstars Blue Marlin tournament also had its official captain briefing on Wednesday night at the Errol Flynn Marina, where Reginald McLean outlined the basic rules including tagging and releasing of billed fish under the prescribed weight and also the importance of assisting any boat that may develop difficulty so as to ensure a safe tournament.

In the meantime, Chris Berry, chairman of Mayberry Investments, reiterated his company’s commitment to sponsoring the Superstars Blue Marlin Tournament, which according to him, brings together anglers from different backgrounds and culture to participate in the popular sport of fishing.

“Yes, we are back with Superstars, and I am particularly pleased to be in Port Antonio once again. The people of Portland are always receptive, and I know that the spin-off will be great for the local people, supermarket operators, jerk vendors, the jelly man, and those engaged in selling of food and other forms of beverages. I will be fishing in this tournament,” he concluded.

The event will climax tomorrow with the awards and prize-giving ceremony.