Asher eager to bring change to the Global Player Council 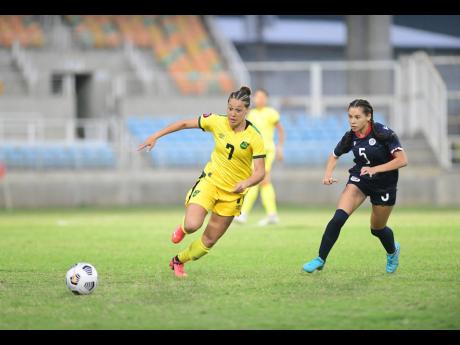 File
Chinyelu Asher (left) in action for the Reggae Girlz during a Concacaf Women’s World Cup qualifying match against the Dominican Republic. The match was played at Sabina Park on April 12, 2022.

As the country’s and Caribbean’s singular voice on the newly created Global Player Council, national senior midfielder Chinyelu Asher hopes that she can be a part of the change that improves the standard of professional players, superficially creating safe work environments for the women’s game.

Asher was named, on September 30, to the 29-member council created by the International Federation of Professional Footballers (FIFPRO) which will represent players in negotiations about global issues directly affecting the sport, including employment standards, the international match calendar, and social media abuse.

Asher is among five players from Concacaf represented as well as its sole Caribbean member. While she described the appointment as a shock, she said that she intends to use it to improve the issues of professionals in the region, believing in the work that FIFPRO has done over the years

“While many of us share a lot of similar experiences, I think it’s a great opportunity for there to be a voice that can reflect the experiences and perspectives as a black female Caribbean player, as well as being a link to support the causes coming from my home region,” Asher told The Gleaner. “I’ve been following the work of FIFPRO for a few years now and it felt extremely fitting to be part of this next step with them.”

The next step for her in her new role is helping to improve and close the standards gap between the men’s and women’s game with the Women’s World Cup slated for next summer, as well as other issues that can benefit all players. However, it is the issue of safe working conditions for her fellow women professionals that is of importance to her in light of the recent revelations about sexual abuse and harassment in the National Women’s Soccer League in the United States, a league where some national players ply their trade. Those revelations were further emphasised by the release of the findings of the independent investigation on Monday which discovered systematic abuse prevalent among multiple teams, players and coaches.

Asher said that she wants to be a part of building that support system that will eliminate such incidents, as well as for a players’ union in the region for their needs to be addressed.

“A lot has been uncovered these past couple of years in the women’s game. As more stories come out I definitely want to be part of that support system and find ways to ensure those work experiences can be prevented in the future,” Asher said. “Something I believe our region can benefit from is the introduction of a union that can unite the players in the Caribbean, share knowledge, create more avenues of support for one another, and try to make sure we are [all] making progress in the ways that we can.”

It is that mindset that has her excited to work with players such as former Italian defender Giorgio Chiellini, English and FC Barcelona full back Lucy Bronze and United States and Portland Thorns midfielder Crystal Dunn, a group that has left her inspired to be a part of the change that they want to see.

“It sent the message that regardless of what each has achieved, there is so much more we can achieve together in creating change for both the game, men and women alike. I’m excited to learn from and work alongside with this group for sure,” Asher said.