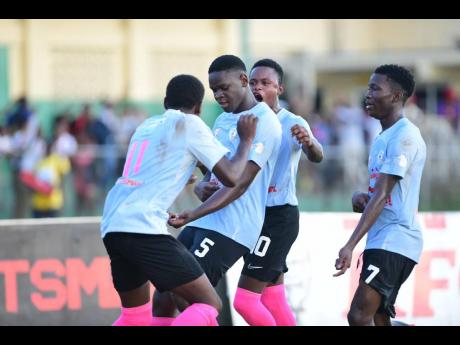 In a seesaw battle, Mona High prevailed 4-3 in their ISSA/Manning Cup Group E game at Excelsior High yesterday in a battle that left raw emotions for both teams but for varying reasons.

Mona got their goals from Kshaine Gordon in the 21st minute, Zhaine Pinnock in the 31st and 75th minutes, and Donhue Mitchell, who got the game-winner in the 88th minute to preserve their winning run in the competition. Devantae McCrea got a brace in the 23rd and 34th minutes while Shelton Ricketts scored in the 47th minute for Camperdown.

But while it was joy for Butler’s team, which prevailed in what he called their toughest test of the season so far, Camperdown’s frustrations boiled over as they questioned Mona’s 75th-minute equaliser that tied the score at 3-3, leading to the ejection of Camperdown head coach Donovan Lofters as well as another member of the coaching staff.

From a free kick, the ball was headed across goal and finished by Pinnock. However, Camperdown were adamant that the ball went out of play, which caused Lofters to storm on to the field to question the call and got sent off. For Lofters, it was the culmination of frustration for some decisions that he felt went against Camperdown throughout the 90 minutes.

“I don’t mind Mona beating me, but it is how. A ball was kicked, and it is clearly outside. We have evidence here. It was clearly outside, and the player head back the ball inside and they got a goal. I had to react. I had to tell him that it was outside and I got a red card for it but I will live with it all day,” Lofters told The Gleaner. “It is an obvious call that every single person can see. So I don’t know what the referee was seeing.”

In response to the controversial call, Butler was offering no sympathy regarding how the play unfolded.

“I’m not one of the most liked people in the world. So I expect to get things not going my way sometimes. What I do know is that one thing I learned as a footballer is that you don’t stop playing. You don’t rely on the referee,” Butler said. “I don’t believe the ball was out. But even if it was, you don’t stop. It wasn’t an easy goal, it wasn’t a tap-in. It was brilliant.”

It was a much different battle than their first encounter last month when Mona thrashed Camperdown 9-2. Butler credited Camperdown’s tenacity, which in his view, brought out Mona’s true strength.

“Camperdown demonstrated that fight, that spirit to never give up. They gave us a battle, and that brought out the best in us. We have a little thing inside all of us that says never die, never give up. And so I am very proud of the Mona team,” Butler said.

Lofters said that their game plan was working and lamented the decision which he said changed the game but was still confident that his team would advance from the group.

With the win, Mona extended their winning streak to seven games and remain in first place in Group E with 21 points. Camperdown are stuck in fourth place with eight points.