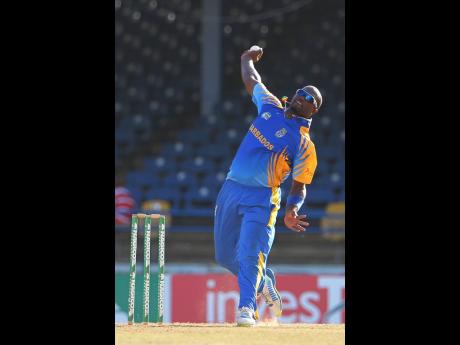 Former Barbados and West Indies off-spinner Ashley Nurse once again made his presence felt with the bat as his India Capitals crushed Bhilwara Kings by 107 runs in the final of the Legends Cricket League.

Playing at the Sawai Mansingh Stadium on Wednesday, the 33-year-old lashed an exhilarating 19-ball unbeaten 42 as Capitals piled up an impressive 211 for seven off their 20 overs.

New Zealander Ross Taylor top-scored with 82 from 41 balls while Australian Mitchell Johnson joined in the runs with 62 from 35 deliveries.

In reply, Kings could only muster 107 in the penultimate over, Australian Shane Watson (27) and Jesal Karia (22) the only batsmen to pass 20.

It was the batting effort from Capitals, however, which laid the groundwork for their victory.

Languishing at 21 for four in the fourth over with former West Indies batsmen Denesh Ramdin (zero) and Dwayne Smith (three) among the early casualties, Capitals were pulled around first in a 126-run, fifth-wicket stand between Taylor and Johnson.

When Johnson fell in the 15th over, the right-handed Nurse arrived to pummel half-dozen fours and one six, adding a further 27 for the seventh wicket with Taylor and a crucial 37 in an unbroken eighth-wicket partnership with Praveen Gupta (four not out).

Kings then slumped to 44 for three in the sixth over before being rescued by Watson and Karia who put on 32 for the fourth wicket.

Once they were separated, however, Kings lost their last seven wickets for 31 runs.