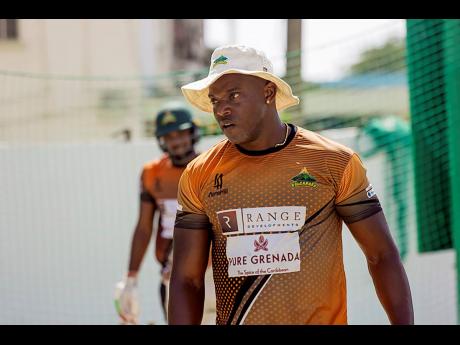 JAMAICA SCORPIONS head coach Andrew Richardson has described team captain Rovman Powell as an “awesome” leader, and believes his performance in the recently staged Super50 Cup was evidence of the personal investment in his development.

Powell impressed both with his form and his captaincy as Scorpions bounced back from a shaky start to the tournament to beat defending champions and favourites Trinidad and Tobago Red Force in last Saturday’s final, and lift their first regional one-day title in 11 years.

He led his side’s batting with 346 runs at an average of 69 with one hundred – a brilliant unbeaten 105 in the semifinal which spearheaded a tournament-high run chase of 318 to stun Guyana Harpy Eagles.

“Rovy (Powell), the way he operates you can tell he wants to take his game to the next level. The way he marshals the troops on the field was awesome to see.”

“Every time he batted, he batted with a purpose. I certainly know – especially [in the final] – he wanted to be there at the end but unfortunately it didn’t go according to plan.”

He continued: “He is one of the cricketers that I can tell you has personally invested in his game and his improvement, and this is just fruits of his labour.”

The 29-year-old West Indies Twenty20 vice-captain at the recent World Cup in Australia also tasted success two months ago when he oversaw Jamaica Tallawahs’ capture of the Caribbean Premier League.

He was one of several players with international experience in the successful Scorpions side, campaigning alongside current Windies stars Sheldon Cottrell, Brandon King and Odean Smith, and former players like Chadwick Walton and Andre McCarthy.

And Richardson believes the experience in the unit meant Scorpions were “built to win”, despite the stumbles early in the tournament when they lost two of their first three matches – including one to minnows West Indies Academy.

“We had some colourful words to get the guys motivated again [following that defeat],” Richardson said.

“From the inception, we said that this team was built to win. This team has got a lot of experience and I thank the selectors for backing us to go with the experienced players.

“We had some bumps in the road. We didn’t start out the competition chasing well, so we had to revisit our plans and then we started batting first, the batters started getting confidence and I always believe in this competition – and in regional cricket – the team that bats consistently well will do well.”

“The bowling has been consistent for Jamaica for years and it was true to form in this competition,” he pointed out.

“It was good to see guys like Bulli putting their hands up. Nicholson Gordon has been getting wickets right through in all formats and it was good to see a collective bowling unit backed up by some sensible batting, especially the game in the semifinals.

“That was a big one for us, that one gave us the real confidence boost that we needed.”

“We haven’t won a regional trophy in quite a little while. This is a very good feeling.”