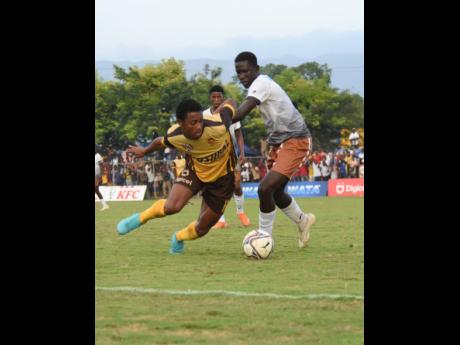 A CLARENDON College unit running at less than all cylinders held its nerve to advance to the final of the Inter-Secondary Schools Sports Association (ISSA) daCosta Cup football competition with a 5-4 penalty shoot-out win over The Manning’s School after a 1-1 regulation-time result in the first of two semi-finals at the STETHS Sports Complex in Santa Cruz, yesterday.

CC started the shoot-out in bizarre fashion after captain Malachi Douglas’s kick came back off the right post. Manning’s netted their first three penalties with confidence, especially the third kick where Shamar Hamilton calmly rolled the ball past the goalkeeper. By now, CC had also netted three when the skilful but short-tempered Devontae Rodney stepped up for Manning’s and put a very poor penalty down the middle into the grasp of the goalkeeper.

This lifted the CC spirits, and they went on to score their next four spots.

Then it was young Kajaye Williams’ turn for Manning’s, but his bravery was rewarded with disappointment after his kick was saved by CC’s goalkeeper, Shamar Cammock.

CC played a lackluster first half by their standards that saw them trailing from the 15th minute, courtesy of Manning’s topscorer, Jhamaleek Porter.

The boys from Chapelton would, however, respond seven minutes into the second half when Kaheem Dixon found the back of the net.

Though CC enjoyed the better of the chances, even hitting the frame, there was to be no go-ahead goal when referee Odette Hamilton signalled the end of regulation play.

Coming off an exciting, end-to-end Champions Cup game last Saturday, Lenworth ‘Teacher’ Hyde admitted that his boys were a bit tired but was proud that they held their nerves.

“They were a bit leggy today because most of them have been playing from Chapelton Maroons (in the Tier Two). I thought we played well, creating some chances, but didn’t put them away. However, I must lift my hat to them,” Hyde said.

“The legs went, and the brain went because the decision-making was not up to our standard. We created chances and didn’t finish. We had to find a way to win, and it came down to the goalkeeper. The excitement and nostalgia are what the football came down to,” he added.

“I think experience got the better of us in the penalty shoot-out. I was hoping when they started badly their nerves would fail, but they held firm, and in the end, the nerves came our way,” Tomlinson said.

“We have four of the players that kicked penalties last year, and they all scored. When it came down to that pressure penalty on the young 13-year-old, anything could happen,” he added.

It will be an all-Clarendon final after Central High defeated Manchester 5-4 on penalties after a 1-1 stalemate in regulation time.

Earlier, Dylan Clarke gave Central the lead against the run of play in the 24th minute. With seven minutes to go in the first half, Manchester could have equalised, but Yarek Carnegie saw his penalty saved by goalkeeper Loen Ricketts.

Manchester were all business at the start of the second half, waiting just 10 minutes for Nickoy Bartley to pull the game level, again from the penalty spot.

However, the much-vaunted Central defence would keep Manchester at bay for the remainder of the proceedings.