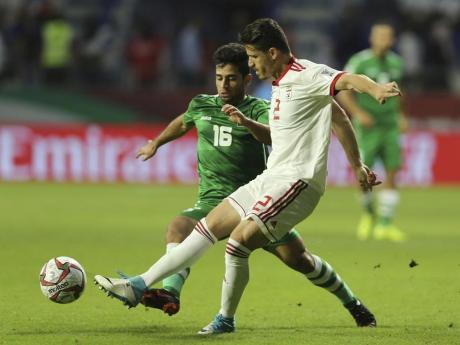 Voria Ghafouri, then an Iranian national soccer team player (right), fights for the ball with Iraqi midfielder Hussein Ali, during the AFC Asian Cup soccer match at the Al Maktoum Stadium in Dubai, United Arab Emirates, January 16, 2019. The semi-official Fars and Tasnim news agencies reported on Thursday, November 24, 2022, that Iran arrested Ghafouri, a prominent former member of its national football team for insulting the national football team, which is currently playing in the World Cup, and criticizing the government as authorities grapple with nationwide protests. (AP Photo/Kamran Jebreili, File)

DUBAI, United Arab Emirates (AP) — Iran arrested a prominent former member of its national football team on Thursday over his criticism of the government as authorities grapple with nationwide protests that have cast a shadow over its competition at the World Cup.

The semi-official Fars and Tasnim news agencies reported that Voria Ghafouri was arrested for “insulting the national soccer team and propagandising against the government.”

Ghafouri, who was not chosen to go to the World Cup, has been an outspoken critic of Iranian authorities throughout his career.

He objected to a longstanding ban on women spectators at men's soccer matches as well as Iran's confrontational foreign policy, which has led to crippling Western sanctions.

More recently, he expressed sympathy for the family of a 22-year-old woman whose death while in the custody of Iran's morality police ignited the latest protests.

In recent days he also called for an end to a violent crackdown on protests in Iran's western Kurdistan region.

The reports of his arrest came ahead of Friday's World Cup match between Iran and Wales.

At Iran's opening match, a 6-2 loss to England, the members of the Iranian national team declined to sing along to their national anthem and some fans expressed support for the protests.

The protests were ignited by the September 16 death of Mahsa Amini, a Kurdish woman arrested by the morality police in the capital, Tehran.