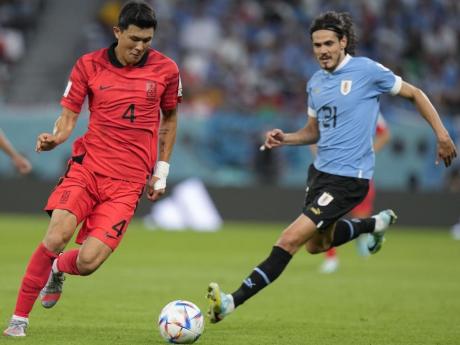 AL RAYYAN, Qatar (AP) — Another favoured team has failed to impress in the early stages of the World Cup.

This time it was South Korea holding South American power Uruguay to a 0-0 draw on Thursday, a result that probably favours the Asian team.

The draw at Education City Stadium was yet another early World Cup match with a surprising result. Argentina and Germany both lost their opening matches in major upsets.

South Korea, with forward Son Heung-min wearing a mask to protect a broken left eye socket, always looked the more likely to score against the more experienced Uruguayans. The South Koreans were quicker, pressing from the opening whistle.

However, in a match with few clear scoring chances, Uruguay had the best chances: Diego Godin hit the post with a header in the 43rd minute and Federico Valverde hit it in the 89th.

Uruguay will next face Portugal in Group H while South Korea plays Ghana.