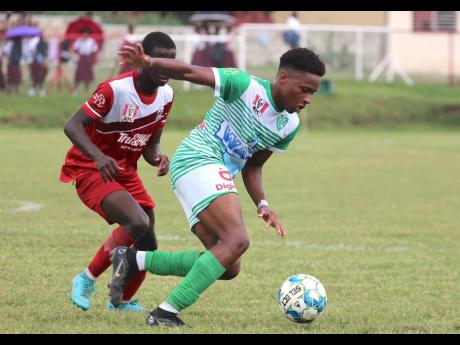 Kyle Gordon eased all fears for the hosts as early as the 13th minute when he outpaced his marker on the left side and turned into the area to rifle past Jermaine Tummings in the Frome goal.

Glenmuir had to wait until late into the second half to put the contest to bed, as Deandre Johnson finished off some good work from substitute Tajuan Cummings in the 75th minute.

Cummings then put the icing on the cake by grabbing a quick-fire double in the 78th and 81st minute to seal a final-four berth for the Clarendon-based side.

“In building our programme, winning is a part of it and we have an opportunity to do that, the next game is the semifinals, so we have to focus on that game and move on,” said coach Andrew Peart.

At Garvey Maceo High the hosts were blanked 2-0 by Edwin Allen High in their quarterfinal encounter.

Over at the Collin Miller Sports Complex in Lucea, Rusea’s High School got the better of William Knibb High 3-1 on penalties after playing to a 0-0 stalemate in regulation time.

In a game where both teams laboured and were wasteful with their chances, it came down to who was stronger mentally. Rusea’s showed the extremely low turnout of fans what a championship team is made of.

Substitute Omarion Robb scored the first penalty for William Knibb and so did Tajay McIntyre for Rusea’s. Kernell Peart stepped up for William Knibb only to hit a poor kick down the middle into the hands of goalkeeper Chadwyck Campbell.

This gave Campbell a big boost of confidence as he stepped up to the penalty spot and riffled what could be considered an unstoppable shot into the top left corner.

With the pressure now on the Trelawny-based team the mental breakdown came as Amari-Christopher Reid hit his shot wide of the right post before Alaqa Logan made it three for Rusea’s and then the William Knibb captain Keven Clarke saw his shot rebound after crashing into the right post.

The Rusea’s players celebrated like they had won the cup which showed how much more it meant to them.

Coach of Rusea’s, Dwayne Ambusley, was pleased to see their week-long preparation for penalties pay off.

“We prepared for it (penalties) all week. If we kicked from now until next morning, we would score everyone,” Ambusley said.

“Sometimes it’s not about the performance but rather the result. He (goalkeeper Campbell) is the number two kicker on the team so that tells you everything. This is a morale booster for us,” he added.

In the other quarterfinal match, York Castle defeated Dinthill Technical 5-4 on penalties after they had played to a two-all-scoreline in full time.