US earn respect at World Cup 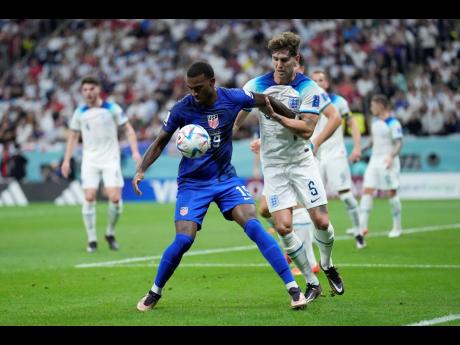 AP
Haji Wright of the United States (left) shields the ball from England’s John Stones during their World Cup Group B match at the Al Bayt Stadium in Qatar yesterday. The game ended in a 0-0 draw.

American players wanted more than a 0-0 draw with England yesterday, likely the most-watched match of their lives.

The US shut out the European opponents in the World Cup for the first time since 1950 at the stadium in the Arabian desert knowing a win in Tuesday’s politically charged matchup with Iran is a must to reach the knockout stage.

“We dominated the game. We had the more clear-cut chances. Obviously, it hurts that we couldn’t put the ball in the back of the net,” said midfielder Weston McKennie, standing out with red, white and blue streaks in his hair. “There’s a lot of people that obviously thought we were going to get blown out.”

The British tabloid The Sun ran a headline calling the result “Yawn in the USA.” England supporters booed loudly at the final whistle and American fans cheered.

“I guess that’s a positive sign,” US star Christian Pulisic said. “Back home watching, I hope we made a lot of people proud.”

Playing before what figured to be a huge Black Friday television audience, the former colony remained unbeaten in three World Cup matches against Ye Olde Country, a run that includes the famous 1-0 upset at Belo Horizonte, Brazil, in 1950 and the 1-1 draw at Rustenberg, South Africa, in 2010. The US had conceded goals in 19 consecutive Cup matches against European opponents until Matt Turner matched Frank Borghi’s clean sheet of 72 years earlier.

American fans outcheered England supporters, too, including a cheeky serenade of “It’s called soccer!” in the 40th minute.

“Now I’ll go back and I don’t think my Leeds teammates can say anything with all the banter they were saying before,” midfielder Brenden Aaronson said. “I think it does show that were going to get respect out of this game.”

McKennie had the best US chance, putting an open nine-yard attempt wide from Tim Weah’s cross in the 26th minute. Seven minutes later, Pulisic bent a shot with his weaker left foot around Kevin Trippier and Bukayo Saka, and the ball glanced off a fingertip of goalkeeper Jordan Pickford and against the crossbar.

The US wore blue tie-dyed uniforms in Bayt Stadium, which has a tent-shaped roof with an underside in a red-and-black carpet pattern. The interior is filled with the sadu pattern of the Bedouin.

Coach Gregg Berhalter made just one change from the 1-1 draw against Wales, replacing forward Josh Sargent with Haji Wright in just his fifth international appearance.