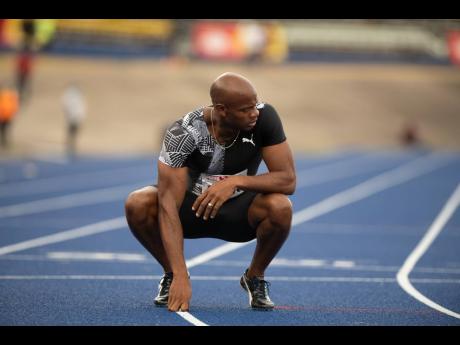 Beyond those numbers lies a story that inspired and annoyed many.

The truth is that Powell, who yesterday announced his retirement from athletics, is the one who proved that Jamaica could grow its champions at home.

The key moment came on June 14, 2005. His MVP Track Club mate Brigitte Foster-Hylton had won the Pan-American Games gold and a silver at the Worlds in 2003 but Asafa’s 100 metre world record - 9.77 seconds in Athens, Greece - was a game-changer.

Don Quarrie and Dennis Johnson had equalled world marks in the 100 metres and the 100 yards but Asafa was the first Jamaican to take sole ownership of the record in the event that bestows the title of “world’s fastest human”.

The affable Ewarton native equalled his world record twice in 2006, and, after a disappointing bronze behind his Bahamian cousin Derrick Atkins and winner Tyson Gay of the United States at the 2007 World Championships, he lowered the world record to 9.74 seconds in Italy.

Usain Bolt came along and took over but Powell stayed in the game.

In 2009, when Bolt chopped the record for the third time, to 9.58 seconds at the World Championships, Powell ran through groin and hamstring pain to take third place in 9.84 seconds, his fastest time ever in a World or Olympic final.

The more he lost big races, the more Jamaicans roasted him.

Insults pinpointed his upbringing, his character and his courage. They called him a choker, a label trampled in 2009, but the facts reveal that injury troubled him at the worst possible moments.

A groin strain put him out of the 2005 World Championships just weeks after his first 9.77 and slowed him in 2007. A torn chest muscle hampered his training in 2008, when he placed fifth in the Olympic final.

The ongoing groin trouble put him out of the 2011 World Championships, in a season where he was the fastest man in the world until its last day and he hobbled home last in the 2012 Olympic final, when a season-long injury took its toll.

Nevertheless, he was the 2006 Athlete of the Year and stands with Raymond Stewart and Bolt as the only Jamaicans to reach three Olympic 100-metre finals.

In my view, he was only universally loved by his compatriots once.

Tall American Ryan Bailey had outlasted Bolt on the anchor of the 4x100 at the 2015 World Relays in the Bahamas, celebrating with the infamous cut-throat gesture.

The following week at the Jamaica Invitational, Asafa walloped Bailey, seemingly on Bolt’s behalf, and the National Stadium crowd was well pleased.

Asafa, now 40, faced adversity with a gentleman’s grace and the World and Olympic relay gold medal winner can hold his head high after an admirable career on the track. Perhaps now that he has retired, we will appreciate how good he really was.

Hubert Lawrence has been trackside since 1980.