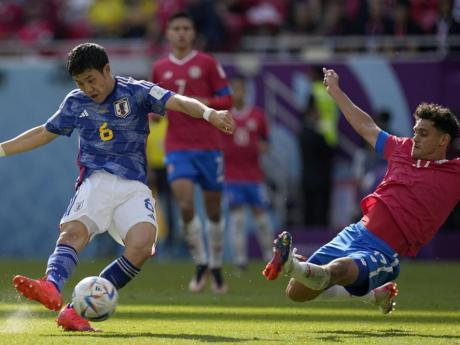 AL RAYYAN, Qatar (AP) — Keysher Fuller scored in the 81st minute to lift Costa Rica to a 1-0 victory over Japan on Sunday, leaving both teams with three points after two games in Group E of the World Cup.

Fuller, who took advantage of a defensive error when Japan failed to clear the ball in their end and hit the net from 18 meters just off the fingertips of leaping Japan goalkeeper Shuichi Gonda.

The match at Ahmad Bin Ali stadium was tactical and largely lacklustre, particularly in a first half that did not yield a single shot on goal. The second half was slightly better with Japan pressing throughout until Costa Rica broke through.

Costa Rica keeper Keylor Navas came up with several rapid fire saves in the final minutes to save the victory.

Japan have one Group E game remaining with Spain, and Costa Rica face Germany in its final group match.

With a victory, Japan could have all but wrapped up a place in the knockout stage after a 2-1 upset of Germany in its opener. Costa Rica were pounded by Spain 7-0 in their first game and just trying to survive.