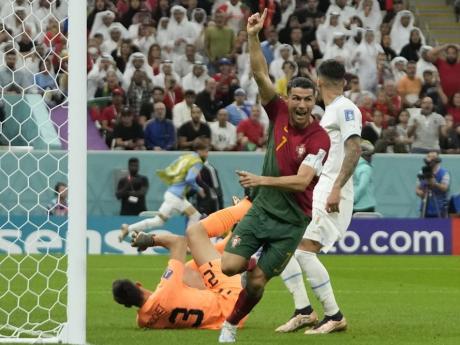 LUSAIL, Qatar (AP) — Cristiano Ronaldo wheeled away in celebration, acting as though he had scored yet another goal at the World Cup.

Instead, it was Bruno Fernandes eventually credited with the goal that set up Portugal's 2-0 win over Uruguay on Monday, advancing the team into the last 16.

Fernandes curled in a cross from the left that barely went over the head of the leaping Ronaldo and bounced into the far corner of the net in the 54th minute to give Portugal a 1-0 lead.

A grinning Ronaldo threw his arms in the air, suggesting he got the final touch and was embracing Fernandes as multiple close-up replays were being shown on the big screens in Lusail Stadium.

The goal wound up being awarded to Fernandes, who added a second from the penalty spot in stoppage time after a handball by Jose Maria Gimenez.

Fernandes was denied a hat trick with virtually the last kick of the game, his shot from outside the area hitting the post and bouncing wide.

Portugal, which opened with a 3-2 win over Ghana, became the third team to reach the last 16 after France and Brazil.

Uruguay has one point from two matches and needs to beat Ghana on Friday to stand a chance of advancing.