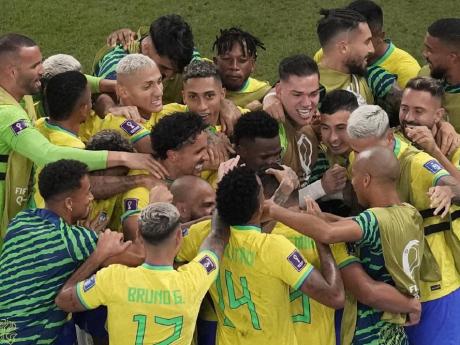 DOHA, Qatar (AP) — Brazil overcame the absence of Neymar to beat Switzerland 1-0 and advance to the round of 16 of the World Cup on Monday.

Casemiro scored in the 83rd minute with a shot from inside the area to put Brazil in the last 16 with a match to spare in Group G.

Brazil forward Neymar stayed at the team’s hotel treating a right ankle injury sustained in the opener in Qatar.

Team doctors have not yet given a timetable on his return — or said if he will return at all.

The win gave Brazil six points from two matches, leaving Switzerland with three. Serbia and Cameroon, which drew 3-3 earlier Monday, have point each.

Switzerland, which had no attempts on target, needs a win in the last match against Serbia to guarantee its spot in the next stage.

A draw may be enough depending on the match between Brazil and Cameroon.

The result extended Brazil’s unbeaten run in the group stage to 17 matches, with 14 wins and three draws.

It has lost only one of its last 29 group games, with the last defeat coming against Norway in 1998 in France.