Neymar out as Brazil face Switzerland 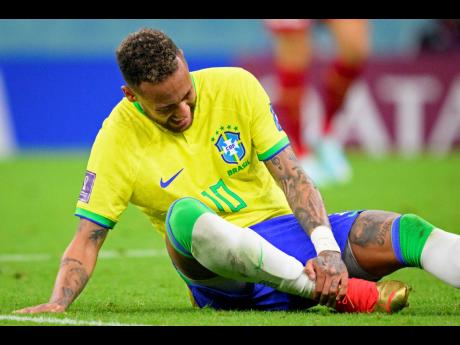 AP
Brazil’s Neymar grabs his ankle after an injury during the World Cup Group G match against Serbia, at the the Lusail Stadium in Qatar last Thursday.

There is no Neymar facing Switzerland at the World Cup today.

Just Richarlison. And Vinicius Junior. And Raphinha. And Rodrygo. And all the rest of the star-laden options in a deep and talented Brazilian squad lacking its most famous player.

“Each and every one is superskilled - even the centre backs and goalkeeper,” Switzerland coach Murat Yakin said yesterday, describing the Brazil players. “They are here to get the title. That’s almost a must for them.”

Neymar’s ankle injury, suffered in a 2-0 win over hard-tackling Serbia on Thursday, is likely to keep the Brazil No. 10 out of action for the rest of the Group G games.

The spotlight was already shining brightly on No. 9 Richarlison after a stellar, scissors-kick shot for his second goal against the Serbs.

Yakin certainly appreciated what was, perhaps, the standout individual moment of the first week in Qatar.

“Absolutely, that’s why we love football, why we watch it, to see such goals,” he said in comments translated from German.

Brazil coach Tite spoke of the different routes to goal his team has without Neymar.

“Maybe we’ll see a feint or dribble from Vini, maybe we’ll see creativity when finishing a play from Richarlison or a header from Pedro,” he said.

Still, Switzerland knew how to stop the Brazil attack when Neymar was playing at the 2018 World Cup, which the teams opened by playing to a 1-1 draw.

“They are very difficult to win against,” said Marquinhos, now a starter in central defence who watched the 2018 draw from the bench in Russia.

Some of Europe’s best teams have also found the Swiss very tough in the past 18 months.

Switzerland beat Portugal and Spain in the Nations League this year. Last year, the Swiss eliminated world champions France in the European Championship and advanced to Qatar by finishing above Euro 2020 winners Italy in their World Cup qualifying group.

“We’ve been challenged by great teams, and we’ve been able to score,” said forward Xherdan Shaqiri, who is playing in his fourth World Cup, a Swiss record. “If we score a goal, I think we can completely change the game.”

Shaqiri laid on the pass for Breel Embolo to score the only goal in a 1-0 win against Cameroon that opened the group on Thursday. The Swiss did just enough to take the three points against their expected weakest opponents.

Top-ranked Brazil must make a second enforced change with Éder Militão or Dani Alves available to replace Danilo, who, like Neymar, was injured against Serbia.