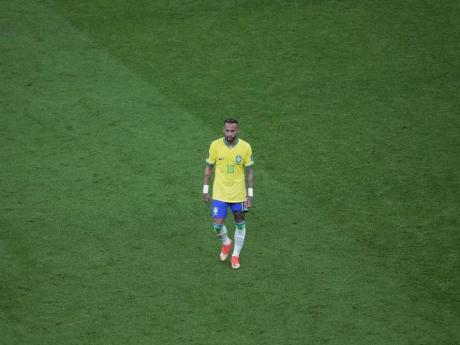 Brazil's Neymar walks on the pitch during the World Cup group G football match between Brazil and Serbia, at the Lusail Stadium in Lusail, Qatar on Thursday, November 24, 2022. (AP Photo/Darko Vojinovic)

Rodrigo Lasmar said the Brazil forward will not be able to face Cameroon in the Group G game on Friday.

Neymar missed Monday's game against Switzerland, when Brazil won 1-0 to secure its spot in the round of 16.

Lasmar did not give a timetable on Neymar's return, and did not say if the player would return at all.

Brazil's coaching staff, though, reiterated Tuesday that the Paris Saint-Germain forward was expected to play again at the tournament in Qatar.

Neymar, who damaged ligaments in his ankle during Brazil's opening match against Serbia, was the only player who didn't go to Stadium 974 to watch the match against Switzerland.

He stayed at the team hotel for physiotherapy treatment.

Lasmar said Neymar also had a fever on Monday, which “was under control” and would not affect his ankle treatment.