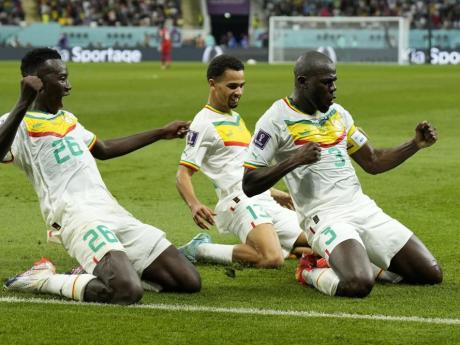 AL RAYYAN, Qatar (AP) — Senegal can now put the disappointment of 2018 to rest.

Kalidou Koulibaly led his team into the last 16 of the World Cup on Tuesday by volleying home the winning goal in a 2-1 victory over Ecuador, four years after the African champions were eliminated from the group stage because of the amount of yellow cards they received.

The Senegal captain's right-footed shot flashed past Ecuador goalkeeper Hernan Galindez in the 70th minute. Koulibaly sprinted toward the corner flag and slid on his knees to celebrate.

The result erased lingering memories from four years ago when Senegal could only draw its last group game in Russia and missed the knockout stage because it had collected more yellow cards than Japan, which advanced instead.

In another must-win match in Qatar, Senegal took the lead after a first-half penalty from Ismaila Sarr. Moises Caicedo then scored for Ecuador to make it 1-1 in the 67th.

Ecuador would have advanced from Group A with a draw and Senegal would have been eliminated.

The Netherlands beat Qatar 2-0 in the other match to win the group. Senegal finished second while Ecuador and Qatar were eliminated.

Senegal last advanced from the group stage at the 2002 World Cup when the team reached the quarterfinals in its tournament debut and its only other appearance at the event.