WI to take a knee before Tests in Australia 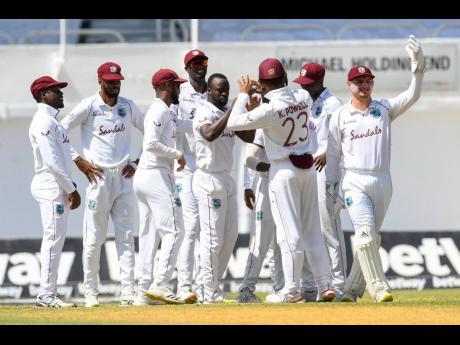 File
West Indies players celebrate the fall of a Pakistan wicket during a Test match at Sabina Park.

Cricket West Indies (CWI) said yesterday that the West Indies team will continue to take a knee during the two-match Test Series in Australia and will also wear the Black Lives Matter logo on their playing shirts.

These actions were also taken during the two-match T20 International (T20I) Series against Australia in October ahead of the matches in the Gold Coast and Brisbane.

West Indies first took a knee back in July 2020 when they toured England for a Test series and have continued to do so since as it demonstrates full support for the fight against racism, inequality, and injustice.

The logo on the shirt was designed back in 2020 by Alisha Hosannah, the partner of Troy Deeney, a professional footballer in the English Premier League. He was contacted by CWI and permission was granted for the logo to be displayed on the collar according to ICC regulations.

Also during the Tests, the West Indies will join the Australians in observing the barefoot circle on the opening morning of the first Test. The barefoot circle is a cricket-centric way for players and teams to take a moment prior to matches to acknowledge the traditional owners of the land, connect to each other as opponents, and pay respect to the country.

West Indies will play the first Test against Australia at the Perth Stadium in Western Australia from November 30 to December 4.

The second Test will be at the Adelaide Oval in South Australia from December 8 to 12. This will be a day/night fixture played under lights. It will be the first pink ball Test for West Indies in Australia. The two teams will compete for the prestigious Sir Frank Worrell trophy.