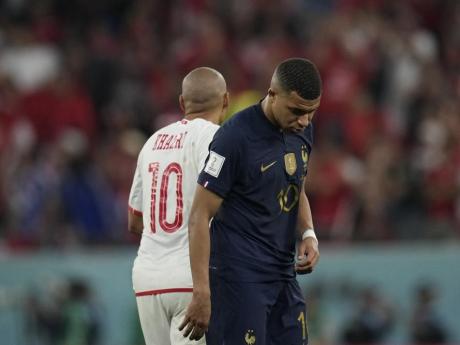 Wahbi Khazri scored in the 58th minute to give the Tunisians the victory, but it wasn't enough to get them into the round of 16.

Australia beat Denmark 1-0 in the other Group D game and finished second on goal difference.

Khazri ran at the heart of the French defence and beat two players before poking the ball into the bottom corner.

He fell to his knees and was mobbed by teammates.

When he got back up, he made a heart shape to the Tunisian fans behind the goal and then limped off, appearing to hurt himself as he fell when scoring his 25th international goal and his third at World Cups.

It was Tunisia's third victory at a World Cup, and it was France's first loss at the tournament since the 2014 quarterfinals when Germany beat the team 1-0.

France forward Antoine Griezmann thought he had evened the score in the eighth minute of stoppage time but he was ruled offside following a video review.

At the same time, Tunisia's players on the bench crowded around a TV monitor hoping for a Denmark goal that would have changed the group standings.