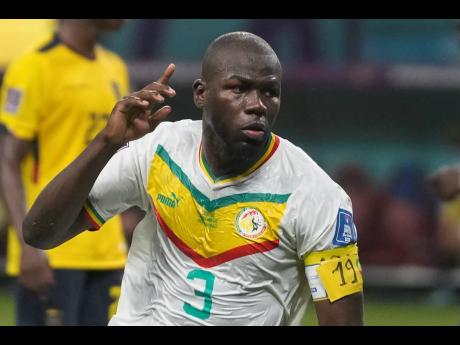 AP
Senegal’s Kalidou Koulibaly celebrates after scoring his side’s second goal during the World Cup group A football match against Ecuador at the Khalifa International Stadium in Doha, Qatar, yesterday.

KALIDOU KOULIBALY literally drew inspiration on his captain’s armband, writing the number 19 on it in memory of one of Senegal’s most loved players.

Then Koulibaly became one himself.

The Senegal captain scored the winning goal in the 2-1 victory over Ecuador on Tuesday, putting his team into the round of 16 at the World Cup despite the absence of the injured Sadio Mane, the team’s best player and one of the best strikers in the world.

The number 19 was to honour Papa Bouba Diop, the Senegal midfielder who scored the winning goal against defending champions France in the opening game of the 2002 World Cup. It was one of Senegal’s greatest football moments and a victory that started that team’s run to the quarterfinals – still Senegal’s best performance.

“We wanted to make him proud. We wanted to give homage to him,” Koulibaly said of Diop, who died at the age of 42 exactly two years ago Tuesday.

“He was the one who made me dream when I was a boy. This was something we weren’t going to let slip.

“Thank God I was there to send that ball into the back of the net.”

Only a win against Ecuador would have taken Senegal through to the next round from Group A, and Koulibaly scored the goal that made it happen at Khalifa International Stadium.

A free kick from Idrissa Gueye bounced off an opponent and came his way. Koulibaly threw out his right foot and hit it past Ecuador goalkeeper Hernan Galindez in the 70th minute. Koulibaly then sprinted toward the corner flag and slid on his knees to celebrate.

The African champions took the lead after a first-half penalty from Ismaila Sarr. But Moises Caicedo evened the score when he was left unmarked after a corner kick in the 67th minute.

At 1-1, Ecuador were going to advance and Senegal were out.

That result would have been as agonising as Senegal’s early elimination four years ago, when the team finished the group stage with a loss to Colombia and even on points with Japan. Senegal were eliminated on a fair play rule because they had picked up two more yellow cards than the Japanese.

This year, Senegal coach Aliou Cisse was forced to reinvent his forward line following the injury to Mane, who sent the team a message before the match. Koulibaly said the Bayern Munich striker has also been an inspiration for the team despite not being in Qatar.

“When it came to his (Mane’s) injury, two thirds of the world probably doubted that we would be able to qualify,” Koulibaly said.

Senegal lost their opening match against the Netherlands 2-0, but gave themselves a chance with a 3-1 win over hosts Qatar. Still, the team needed a victory over Ecuador.

“We were up against a brick wall,” Cisse said.

The 24-year-old Sarr won the penalty when he was knocked over by a clumsy challenge from Ecuador defender Piero Hincapie just before halftime. He side-footed his penalty into the bottom right corner in the 44th minute and almost the entire Senegal bench and coaching staff ran to him.

Sarr also headed over to the corner flag to celebrate while putting his hands over his eyes.

He can look now, because Senegal have at least one more match to play.

Senegal now have a chance to match, or even better, the country’s scintillating run to the quarterfinals in 2002, when Cisse was the captain and the team matched Africa’s best performance at a World Cup. No African team has made the semifinals.

It was the end of a strong campaign for Ecuador and striker Enner Valencia, who had scored his team’s first three goals at this year’s World Cup and played against Senegal despite struggling with a bad knee strain. Valencia was left consoling Galindez, who was tearing up near the end of the game and couldn’t hold back after the final whistle as he cried on Valencia’s shoulder.

Ecuador go home after missing the chance to go past the group stage for only the second time in the country’s history. Senegal finished second in Group A and qualified for the last 16 with the Netherlands, who beat Qatar 2-0.