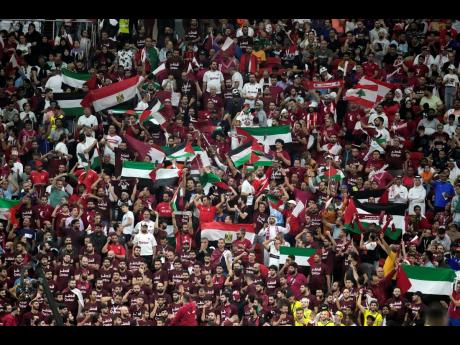 AP
Fans cheer during the World Cup group A football match between the Netherlands and Qatar, at the Al Bayt Stadium in Al Khor, Qatar, yesterday.

IBRAHIM AL-GHANIM, a former Qatar national soccer team defender, was dressed like thousands of other local men as he rushed to his seat through a main foyer at Al Bayt Stadium.

He wore the traditional thobe – the long-sleeve, floor-length white robe – and came to celebrate Qatar’s national team on Tuesday in its final match at the World Cup.

“We are all here to support Qatar and the team, and to enjoy it,” Al-Ghanim said. “Of course, no Qatari expected to win the World Cup.”

Al-Ghanim suggested not using the World Cup as the barometer. He pointed to Qatar winning the 2019 Asian Cup, beating Japan in the final.

“We have had success, but this is bigger,” he said. “We are progressing.”

Qatar lost Tuesday’s match against the Netherlands 2-0. Qatar lost all three of its group games, scored only one goal, and was eliminated from its own tournament even before this final game.

Qatari fans applauded courteously at the end, some held up banners expressing support, and one group displayed a sign in English with the Arabic word for “thank you” thrown in.

Qatar was the first host nation to lose their opening match, and only the second to be eliminated from the group stage. But that was not the main point. Simply having the World Cup – the first in the Middle East – was the focus.

Qatar has a population of 3 million, but only about one in 10 is Qatari. Workers – both skilled and unskilled – come from all over the world.

“We are here to support the team and say goodbye,” said Ramzy Dabbous, a Lebanon-born chef who has lived in Qatar for 12 years.

He carried a maroon and white Qatar flag in one hand with a large flag covering his back.

He also wore an orange sweater.

Prathik Venkatesh was born in Qatar and has lived in the country most of his life. But his roots are in India and he studies in the United States.

“I’m not Qatari, but I was born here and live here since I was a kid,” said Venkatesh, also draped in Qatar’s maroon and white colours.

Prem Lama, a Nepalese who said he has worked for 19 years in Qatar, and his daughter, Avilasha, were also saturated in Qatar colours.

“I like football,” Avilasha explained. “And it’s the World Cup in Qatar.”

And maybe the last for a long time.