Australia may have new ‘golden generation’ 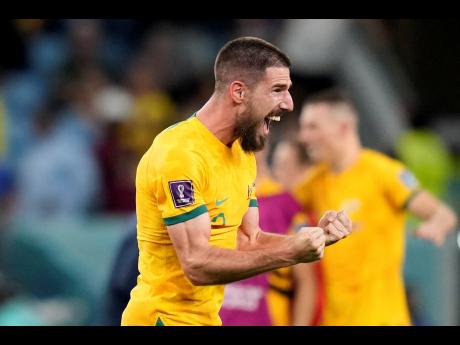 AUSTRALIAN SOCCER may have a new golden generation.

Mathew Leckie scored and the Socceroos beat Denmark 1-0 on Wednesday to advance to the round of 16 at the World Cup for only the second time.

The last Socceroos team to earn that honour got Australia into the knockout stage in 2006. This team did it again, and Arnold believes the achievement is worthy of a national holiday.

“Give the people a day off,” he said. “I think there will be some hangovers and some joy.”

The leader of the new generation could be Leckie, who took a pass near the centre circle from Riley McGree in the 60th minute and moved around a defender before hitting a left-footed shot past Denmark goalkeeper Kasper Schmeichel.

“I went left and swung the left foot,” Leckie said, who was then mobbed by his teammates on the field and off the bench. “I think I got slapped in the head about 100 times.”

“We want to dream big,” he said. “I think the key was, when we came to this tournament, we always said we wanted to get out of the group. And now we’ve done that. Now the most important thing is to get ourselves ready, because we worked super hard tonight. I think most of the boys are exhausted. That’s exactly what we needed to do to get a result today.”

Australia finished with six points in Group D. Defending champions France won the group on goal difference, despite losing to Tunisia 1-0 in the other group match.

The World Cup proved to be a major disappointment for Denmark after reaching the semi-finals at last year’s 2020 European Championship. They slogged through a 0-0 draw in their opening match with Tunisia and then recovered in a 2-1 loss to France.

Denmark coach Kasper Hjulmand was unable to say why one of the world’s top-ranked teams played so poorly.

“No explanation,” he said. “Questions will be asked. But I think it’s important just to get a bit of distance to it so I can think rationally. I can’t do that right now. The emotions are too big. The frustrations are too big.”

Denmark dominated possession through much of the game but couldn’t generate enough chances against Australia’s tenacious defence.

Mathias Jensen had one of his team’s best chances of the game in the 10th minute, but Australia goalkeeper Matthew Ryan came up with a point-blank save.

Australia started the second half well as Jackson Irvine sent a good chance over the crossbar. But the Socceroos quickly reverted to defending before breaking through with Leckie’s goal.

By the end of the match, all 11 Denmark players were pressing for an equaliser.

On two late corners, Schmeichel sprinted upfield to put himself into the mix in front of goal. Ryan caught one corner and Schmeichel scurried back. He came all the way back on a second corner with about a minute remaining, but that attempt also amounted to nothing.

Hjulmand said the buck stopped with him.

“We did not reach our level. There is not doubt about that,” Hjulmand said. “What else is certain is, it’s my responsibility.”