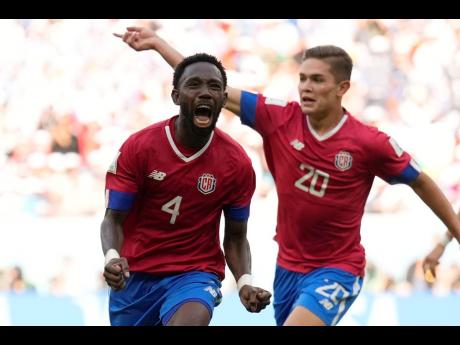 THE SAYING ‘the ball is round’ has never held more true than at the FIFA World Cup in Qatar.

He said teams that were not once highly regarded are now standing up and fighting with the big teams.

“They are doing that now with a high level of frequency and that, for me, is positive, because little teams can get themselves tactically arranged and don’t get beaten as easily as a few years ago.

“Also, I don’t think there is that nervous fear that people have anymore for some teams. England, for example, played a little team (Iran) and beat them. Then they played the USA and could not beat them.

“So, coaching has improved significantly and there are some factors that, only at the end when FIFA does their report, you are going to see those things,” he said.

According to Stewart, the trend in this world Cup of the smaller teams competing with the bigger teams, and the tactical application and discipline of the smaller nations, is unprecedented.

“The characteristics that exist among teams are very different from what we’ve been used to. So some significant improvements have gone on, and probably that is a reflection of what has happened in the leagues.

“The J League (Japan) is one of the leagues that has improved leaps and bounds, and teams are made up of mainly local players. So things are happening positively in some of the countries and that is being reflected,” he added.

Humble Lion coach Andrew Price agrees, the gap is closing. He said there are hardly any minnows left in world football and that this World Cup tournament shows, more than ever, that the ball is round.

“That was proven with Costa Rica. Japan looked very good in the first game against Germany and we were expecting them to beat Costa Rica, who were beaten 7-0 by Spain. Yet Costa Rica are still in with a shot of getting to the next round.

“The gap is closing. In this global village, what is happening is that the coaches are improving, the players are improving, as a lot of players are playing overseas and getting exposure and it is just very competitive. So, if you are not on your A game, then you are in trouble,” he commented.

“A football game is 90 minutes, you can dominate for 80 minutes and have your opponent on the back foot but, in the 89th minute, they get one opportunity and win the game 1-0. It is about 90 minutes and luck favours the brave, and a lot of teams have been very brave in this World Cup.”

Former Tivoli and Waterhouse coach Calvert Fitzgerald says this World Cup has proven the playing field is much more level than before, as smaller football nations have become more enlightened about all facets of the game.

“The results now show it and it is obvious that the minnows are now stepping up. There is not that big gap between the big nations and smaller football countries.

“Everything is online now, so nothing is secret anymore. Coaches can get international experience, lots of players are now playing in top leagues in the world. So nothing is a secret anymore and the gap has reduced significantly,” he said.

Like Price, Fitzgerald pointed to the performance of Costa Rica as a prime example of how countries have progressed tactically and why no team can be taken lightly.