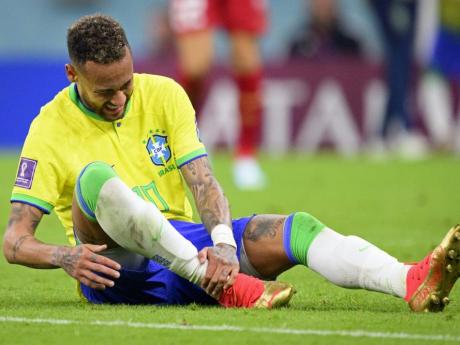 Brazil's Neymar grabs his ankle after an injury during the World Cup group G football match between Brazil and Serbia, at the Lusail Stadium in Lusail, Qatar on Thursday, November 24, 2022. (Laurent Gillieron/Keystone via AP)

DOHA, Qatar (AP) — Brazil will reevaluate Neymar's condition and decide about his chances of playing again at this year's World Cup after Friday's game against Cameroon.

Neymar hurt his right ankle in the team's opener against Serbia and was ruled out for the rest of the group stage.

Also not playing against Cameroon because of injury were right back Danilo and left-back Alex Sandro.

“We are focused on the game against Cameroon, and then we will start the decision-making process about these players.

We already have a plan prepared for their return.”

Xavier did not elaborate on the plan.

Brazil team doctors have not yet given a timetable on Neymar's return or said if he would be back at all.

Brazil reached the round of 16 after two matches and needs only a draw against Cameroon to secure first place in Group G.