Tunisia coach faces questions about future despite win over France 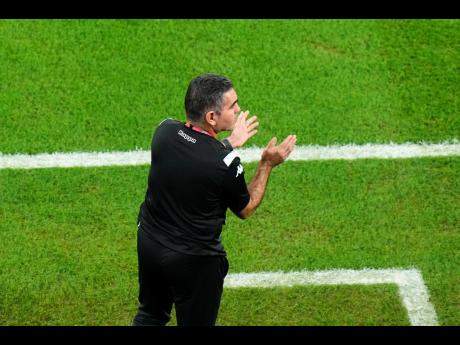 TUNISIA COACH Jalel Kadri failed in his “personal mission” to get the national team through the group stage at the World Cup for the first time in its sixth attempt.

Now he’s facing questions about whether he will stay in charge.

“I don’t know why you insist that I resign. I have a contract that is based on objectives,” Kadri said after his team beat defending champion France 1-0 yesterday.

“The objective was not fulfilled but we still have some time before making a final decision. It’s up to the Tunisian federation to decide what happens now.”

Tunisia started well enough in Qatar by drawing 0-0 with European Championship semifinalist Denmark, but the team missed some chances in a 1-0 loss to Australia.

“We were excellent against Denmark and we only failed in one half of a game against Australia,” Kadri said. “We left with a lot of honour and we made our fans proud.”

The victory over France was Tunisia’s third win at a World Cup tournament. The first was against Mexico in 1978 and the second came against Panama four years ago in Russia, when Khazri also scored.

“We deserved to win. We beat the world champions. But there’s still a bitter aftertaste because we’re out,” Khazri said. “We’re disappointed not to qualify with four points. I think the Tunisian people can be proud of us.”

Aside from Khazri, who scored two goals at the 2018 World Cup, the Tunisians didn’t have much luck up front.

When they did create chances against Australia, they wasted them.

“That’s the thing with soccer, you should only count on yourself,” Khazri said. “We didn’t do enough in the first two games, otherwise we’d be through.”