Belgium crash out as Croatia advance with 0-0 draw 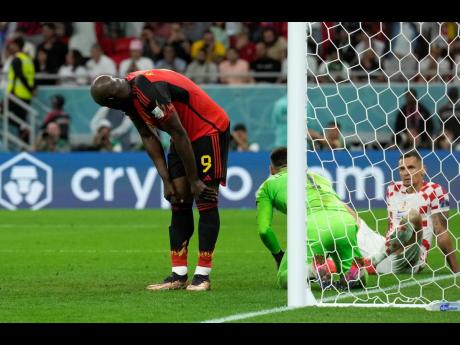 The ball reached Romelu Lukaku right in front of goal with seconds remaining. Score, and he would send Belgium into the round of 16 of the World Cup.

Belgium and its ageing generation of players were eliminated from the tournament Thursday after a 0-0 draw with Croatia, which advanced as the second-place team in Group F behind Morocco.

Minutes after the game, Belgium coach Roberto Martinez announced that he would be leaving his role after more than six years – a decision he said he had reached before the World Cup started.

His departure could easily have been delayed.

Lukaku, Belgium’s record scorer but only recently back from injury, came on as a halftime substitute and squandered several great chances, the best coming in stoppage time when Thorgan Hazard’s cross fell to him at the back post, barely two metres out. The ball struck Lukaku’s midriff, and instead of rolling into the net, it bounced back across the front of the goal and was gathered by Croatia goalkeeper Dominik Livakovic.

Earlier, Lukaku hit the inside of the post with the goal virtually unguarded. Another chance, from a header in front of goal, sailed over the bar following a cross from Kevin De Bruyne.

Lukaku punched the side of the dugout as he walked off after the final whistle, knocking the plexiglass screen out of place. Moments earlier, he was sobbing in the arms of Belgium assistant coach Thierry Henry.

“We could have won this game by three goals and we’d be walking away feeling very different,” Martinez said.

Croatia, the 2018 runners-up led by Luka Modric, will attempt to make another deep run at the World Cup after also reaching the semi-finals in 1998.

“This is a team mix of experience and youth,” said Croatia coach Zlatko Dalić, who added of Belgium: “We were lucky that they didn’t take their chances.”

Belgium are facing the break-up of their talented but underachieving squad after failing to live up to its status as the second-ranked team and one of the tournament favourites. What has long been called Belgium’s “Golden Generation” – now featuring six players with more than 100 appearances – is set to split, with the World Cup semi-final appearance in 2018 as its peak.

The team, which has faced reports of infighting and divisions between players during the tournament in Qatar, scored only one goal in three games and saved its best performance until its final match. It came too late.