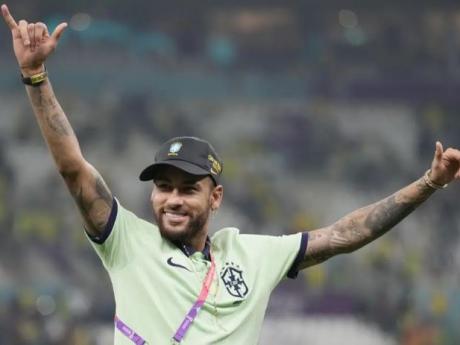 DOHA, Qatar (AP) — Neymar is expected to train with Brazil again on Saturday while left-back Alex Telles and forward Gabriel Jesus have been ruled out for the remainder of the World Cup after getting injured in the match against Cameroon.

Neymar was expected to practise with the ball for the first time since injuring his right ankle in the team's opener against Serbia.

Brazil doctors said they will reevaluate the injury after the training session and decide whether Neymar will be available for Monday's match against South Korea in the round of 16.

Neymar looked fine as he accompanied his teammates at Lusail Stadium on Friday.

He walked without a limp and briefly played with the ball without any visible issues.

He could be seen jogging across the field on his way to the locker room after the match was over.

Neymar, seeking his first major title with Brazil, was forced out of the 2014 World Cup after hurting his back in the quarterfinals against Colombia.

He didn't play in the 2019 Copa America because of another right ankle injury.