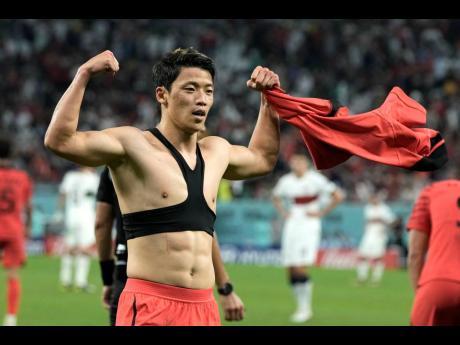 The sign said it all. Hwang Hee-chan got the message.

A young South Korea fan held up a sign that read “One More Goal” during halftime of the team’s match against Portugal yesterday at the World Cup. The teams were even at 1-1 at the time, but the South Koreans needed another goal to earn a spot in the round of 16.

Hwang delivered the dramatic goal in stoppage time, lifting South Korea to a 2-1 victory and their third trip to the knockout stage of the World Cup.

“I’m glad I was able to give this present to the fans,” said Hwang, who pulled off his jersey and struck a classic muscle-man pose after scoring as thousands of South Korean fans burst into a screaming, cheering frenzy at the north end of Education City Stadium.

It’s South Korea third trip past the group stage at the World Cup. The team reached the semifinals as co-hosts in 2002 and then made it to the round of 16 in 2010.

Hwang missed the first two group games in Qatar with a hamstring injury, and entered as a substitute in the second half against Portugal.

“In the first match it was impossible for me to play and the pain got worse,” he said. “I did a little running, but I thought I could play the second match, but they held me out.”

He finally made an appearance yesterday. And it turned out to be a match-winning, World Cup-advancing appearance, too.

“It was a little bit of a risk,” Hwang said. “But I didn’t care what happened to me personally. I just wanted to contribute.”

South Korea were heading out of the tournament in the final minutes when a Portugal corner got cleared and Son Heung-min raced down the right side of the field. He slipped a pass through an opponent’s legs and into the path of Hwang, who converted with a low finish.

“When Son got the ball, I was convinced he would pass me the ball,” said Hwang, who said his coaches and teammates gave him confidence as he was about to enter the game.

“They told me I was going to create something,” he said. “A lot of teammates told me they trusted me.”