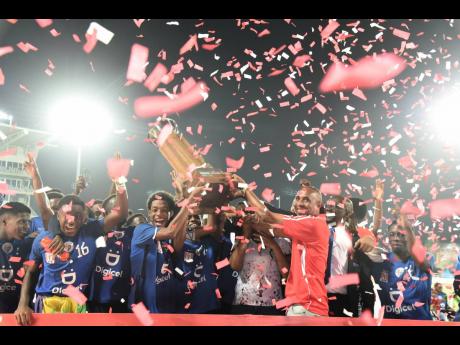 Ian Allen
President of the Inter-Secondary Schools Sports Association Keith Wellington (right) presents the Manning Cup to members of the Jamaica College team shortly after they defeated St Andrew Technical 8-7 on penalties in the final at Sabina Park last night.

Three times it has gone to penalties.

And now three times JC have prevailed. And as far as they are concerned, the normal order of urban schoolboy football has been restored.

JC claimed their 31st hold on the title beating STATHS 8-7 on penalties in last night’s final at Sabina Park.

It ended 1-1 in regulation as Jaheem Frazer gave the Dark Blues the lead in the 26th minute before Shakeone Satchwell equalised in the 57th minute.

In the shootout, JC had their first penalty saved by STATHS goalkeeper Jaheem Williams and STATHS had a chance with the last kick to win it but Namar Nelson missed his kick to send it to sudden death.

STATHS missed their kick in the ninth round for JC to win the 2022 competition.

It is the third time the schools were facing each other this year. It’s a battle that has emerged as one of the most anticipated clashes of the schoolboy football season that wrote another chapter in their storied rivalry.

STATHS were the aggressors in the first 10 minutes as they pressed JC despite not creating clear-cut opportunities. JC had moments of ascendency but were let down by unforced errors in the middle of the park.

In the 26th minute, JC broke through with their first shot on target. A long cross to the left side found the feet of Frazer and he unleashed a curling shot that gave STATHS goalkeeper Jahhem Williams no chance, to the delight of the JC supporters. STATHS could have restored parity seconds later but Dwayne Atkinson saw his shot blocked by a defender and then went into the grateful hands of JC goalkeeper Rassico Rose.

The end of the first half turned into a midfield battle where neither team dominated. But JC had to ride out a late flourish from STATHS in the first half as Omar Reid’s shot was deflected for a corner and from the resulting delivery cleared a Leon Brown header off the line.

But the second half saw JC grow into the game and take the fight to STATHS. Maquan Aldridge came close to doubling their advantage but saw his header hit the post. STATHS’ Shakeone Satchwell fired his shot over the bar moments after that, reminding JC of the threat that they possess.

But STATHS got their reward in the 57th minute as a deep pass managed to find Satchwell who sent their fans into wild celebrations. From there, STATHS rode the momentum to put JC back under pressure searching for the crucial second goal, both teams battling for any space offered to them.

But STATHS faced once more the agony of penalties as for the third time they were bitten by the penalty shootout. The three-decade wait continues.