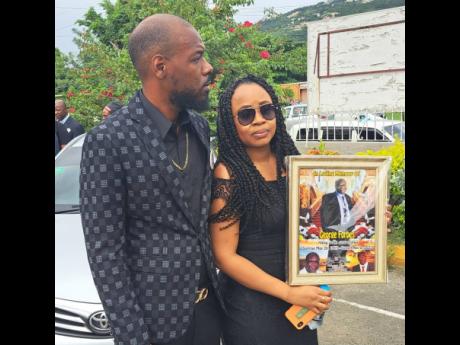 Livingston Scott
George Forbes’ son Oshane (left) and daughter Melika pose with a portrait of their father at his funeral service at the New Haven Adventist Church yesterday.

Administrators from various sporting bodies turned out to remember the man who was the face of the Inter-Secondary Schools Sports Association (ISSA) from 2002 until his departure in 2020.

Veteran sports journalist Bailey described Forbes as a lion who was relentless, calm, calculating and smart.

“You were the most impartial man I knew. Names, suits, roots or gender never mattered. The rules did,” he said.

“Everybody knew you were registered workaholic. Professionalism and ambition drove you 24/7. You kept you motor running for long hours and your nature kept you going when you should rest,” Bailey said.

Wellington, who made a tribute on behalf of all high school principals and the ISSA staff, said his association was blessed and proud to have had the service of Forbes.

He noted that since walking through the doors of ISSA in 2002, Forbes’ contribution was sterling and invaluable.

“George was regarded by ISSA and the wider sporting industry as an upstanding sports administrator. His contribution to all sports was outstanding, but particularly his contribution to football, track and field and cricket. It is no wonder the presidents of the Jamaica Football Federation, the JAAA and chairman of the youth committee at the Jamaica Cricket Association are here with us,” he commented.

JAAA president Garth Gayle said Forbes, who was an executive with his association, was a fearless mitigator.

“You could depend on him to carry out any critical or timely task. Many times at executive meetings I would hold firm to a position and no one could get me to change. But he was a fearless warrior who could get me to review and look at another viewpoint,” he recalled.

Meanwhile, in the eulogy, Forbes’ daughter Melika closed out with the words of Frank Sinatra’s famous song, ‘I did it my way’. A request from Forbes himself.

He was laid to rest at the Meadowrest Cemetery in St Catherine.