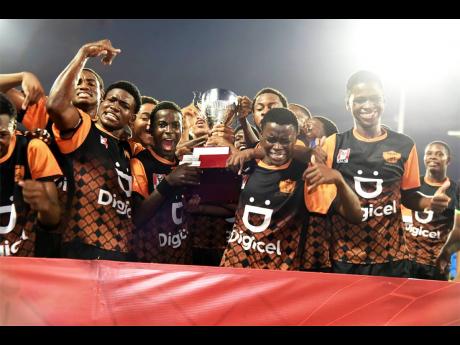 AFTER Tivoli High’s Dwayne Johnson smashed the crossbar of Haile Selassie High’s goal with a header as early as the 10th minute during yesterday’s Walker Cup KO final at Sabina Park, the signs were clear that the Christopher Nicholas-coached team meant business in their first final since 2005.

The Tivoli unit would go on the open their account in the 36th minute following a magnificent team buildup which Daniel Watson capped off with a brilliant header to raise the roof of Sabina Park. It was his fifth goal of the season.

A never say die Haile Selassie were rewarded in the second half as they got their equaliser in the 48th minute thanks to Joshua Dewar. Following their 1-1 full-time scoreline, it would take the dreaded penalty kicks to separate both teams. As both teams traded misses, it was Tyreece Francis’ error that gifted coach Nicholas a 6-5 victory on penalties and his first title as a head coach.

“ It’s a joy, words can’t explain as this just brings back the joy within these youngsters and the community as this is what Tivoli is all about. This is what we want to be recognised as, as champions because champions and legends come from Tivoli,” he said.

Nicholas, who won the Walker Cup as a player with Tivoli back in 1996, stated that prior to the fixture his pre-match message to the team was to stay relaxed for as long as possible.

“Just stay relaxed, I know it’s going to be a tense game, but please just be relaxed,” he told the players. Nicholas added that a lot of the players were playing on this stage for the first time, so we (coaches) have to be there to ensure that they are relaxed.

For beaten finalists Haile Selassie, their wait for a first title at this level will be extended but Dixon was pleased with what he saw from his charges throughout the season.

“I’m pretty satisfied, this was my first season and we went to the Walker Cup final, so this says a lot for the boys. We know it’s a tough loss because we know that whenever it goes to a penalty shootout, it’s anybody game,” Dixon stated.

Dixon added that his group will have to put this defeat behind them and refocus for what is ahead.

“We just have to dust off ourselves and look at what is ahead. We had a fantastic season, we reached the quarterfinal round of the Manning Cup and the final of the Walker Cup,” Dixon said.