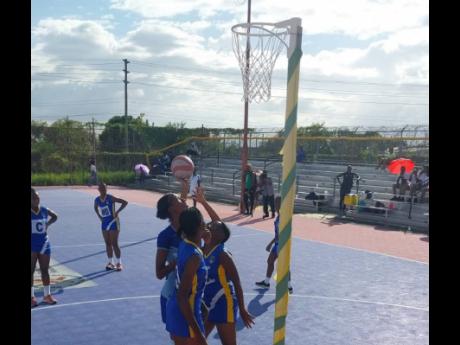 Raymond Graham
PHOTO BY Action from the under-19 schoolgirl netball semi-final between St Catherine High School and St Hugh’s High School at the Leila Robinson Courts on Friday.

COACHES OF Gaynstead and St Catherine High schools, Dalton Hinds and Phylis Thompson, respectively, are oozing with confidence after their teams scored close victories in the semi-finals of the Urban ISSA Under-19 Schoolgirl Netball competition on Friday at the Leila Robinson Courts.

The Gaynstead-Jose Marti clash was a meeting of the two finalists from the last competition in March where a truncated season saw the former coming out on top.

It was the same result this time around as the Dalton Hinds-coached team, who were big favourites, found the going tough and had to dig deep to stave off a determined Jose Marti.

Gaynstead led 8-6 after the first quarter then went into the half-time break with a 15-11 lead. They led 24-21 after the third quarter before holding on in the end for the three-point victory. Goal shooter Akerah Latty, with 33 goals from 39 attempts, led the scoring for the winners.

“With their very experienced squad, we knew that Jose Marti would have come out with their A game as both teams were in the last final, but we were determined to go all the way with our young team. We are glad for the win and we are looking forward to the final as St Catherine are a really good team, but I am banking on my players for the win,” said winning coach Hinds.

The St Catherine-St Hugh’s encounter was a thriller with both teams going toe to toe for the entire encounter.

St Catherine led 9-8 after the first quarter and held on to a narrow 17-15 lead at the half. They held on to that two-point lead at the end of the third stanza, which ended 27-25. The last quarter was a ding-dong battle and could have gone either way, before the Open Rally winners held on to a one-point lead to book their place in the final.

Goal shooter Kellyann Hunter was perfect for the winners with 27 goals from 27 attempts while goal attack Kayla Wright had 9 from 14.

“It was a very competitive game as both teams played their best netball. However, I am glad for the win and to see that all players ended injury free. The final will be just as competitive. There are some areas we need to work on before this game,” said Thompson.

Earlier, Immaculate and St Hugh’s booked their final berths in the under-16 competition with narrow semi-final wins.

The finals in both competitions will be played on Thursday at the Leila Robinson Courts.