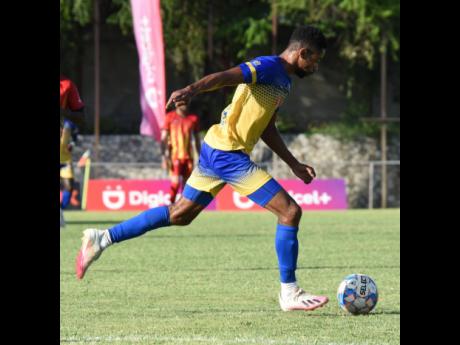 Ian Allen
Timar Lewis of Harbour View FC in action against Faulkland FC during a Jamaica Premier League match at the Anthony Spaulding Sports Complex yesterday. Lewis scored a first half hat-trick to lead his team to a 6-1 win.

The 24-year-old forward scored in the 31st, 35th, and 45th minutes and had a goal denied after his 40th-minute corner was ruled an own goal.

Nevertheless, the player described the day as “beautiful” and hopes that there are many more to come.

“I have never done this in the JPL before, and it was a beautiful day. Last night I called my mom and told her I was going to score two. But God had other plans. It turned out to be four, but they took back one and said it was an own goal.

Lewis has never scored more than two goals in a season in his four seasons in the league, but he admits that it is part of his game his coaches have been encouraging him to improve on.

“Last season, we won the title, but personally, I did not do what I had planned.

“The coach knows what I can do, and he knows that once my confidence is up, I will give him these performances. So when he says he expects more from me, it’s performances like these. I would love to get more goals, produce even better performances, and represent my country. That is what I am working on bit by bit every day,” he added.

Harbour View threatened for most of the first half but took half an hour to break the deadlock when Lewis rounded goalkeeper Robert Morrison and a defender before slotting home.

Five minutes later his ferocious strike from 30 yards made it 2-0. And the player was having a field day, when his 40th-minute corner slipped from Morrison’s grasp and into the goal.

He got his hat-trick in first-half added time when he broke away and slotted past Morrison to make it 4-0 at the break.

“Tereto Gregory slammed home a cross from Husana Johnson to pull a goal back for Faulkland six minutes into the second half, but goals from Colorado Murray (69th) and Shawn Daley (87th) sealed a comfortable win.

“Timar was the only one disciplined enough to beat the offside trap. He was not trying to get ahead of the ball before time,” said assistant coach Sean Fraser. “We have been knocking Timar for a while, saying he needs to add goals to his game. But we had no complaints today. He was fantastic, and he deserved it.”

Meanwhile, newly appointed Faulkland coach Leacroft Lettman said they are a work in progress but thought that some crucial calls went against them.

“We tried to maintain our discipline, but after the first 30 minutes, our concentration started to lapse,” he said.

Both games will be played at the Anthony Spaulding Sports Complex