FLOW Qatar Spotlight | A star is born, a petulant one dims and an upsetting ‘Panenka’ 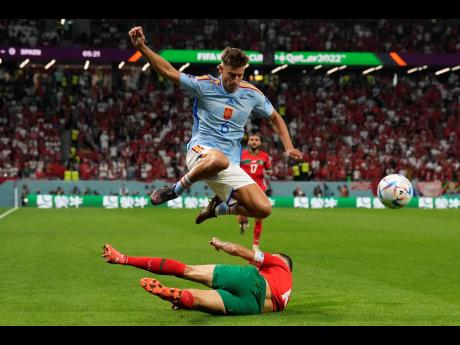 AP
Spain's Marcos Llorente jumps over the challenge of Morocco's Romain Saiss during their World Cup round of 16 football match at the Education City Stadium in Al Rayyan, Qatar on Tuesday. 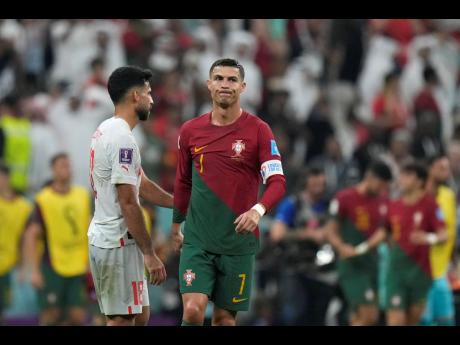 AP
Portugal's Cristiano Ronaldo walks during the World Cup round of 16 football match against Switzerland at the Lusail Stadium in Lusail, Qatar on Tuesday. 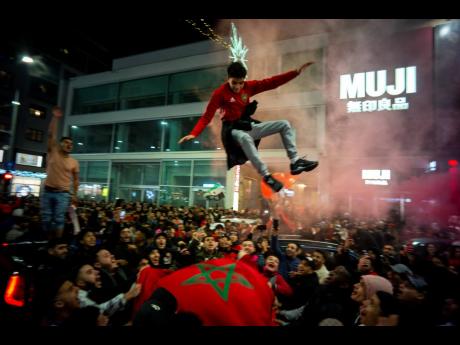 AP
Morocco's fans celebrate after their team won their round of 16 match against Spain at the World Cup football tournament in Qatar, in Milan, Italy on Tuesday 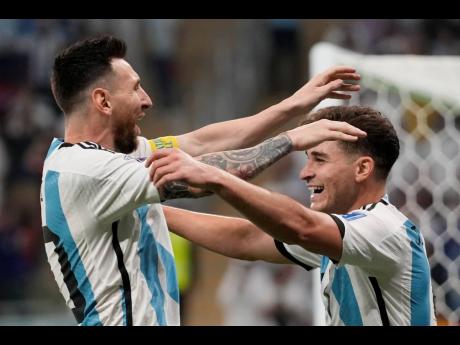 AP
Argentina's Julian Alvarez (right) and Lionel Messi celebrate their side's second goal during the World Cup round of 16 football match against Australia at the Ahmad Bin Ali Stadium in Doha, Qatar on Saturday.
1
2
3
4

BACK in 1994, late great R&B legend Teddy Pendergrass made these lyrics popular, “If you don’t know me by now … "

From the group stage of this tournament, one could see that the “Atlas Lions” had something about them, a fight, a determination which has seen them through to the quarterfinal stage of the FIFA World Cup and a date with Portugal.

The Moroccan defence has been as stubborn as a mule. To date, they’ve only conceded one goal, an own goal against Canada.

Spain and everybody else should have seen this coming. Does Portugal have the keys to unlocking this Moroccan defence, or will the fairytale run for a little longer? The entire continent of Africa is rooting for them and while they’re the underdogs, they are not playing scared. The Moroccans now have Ronaldo’s Portugal in their sights, count them out and your own peril.

No Ronaldo, no problem

No Christiano, no problem. Portugal swept past Switzerland in their second round World Cup match 6-1 with their star man on the bench.

A hat-trick from Ronaldo's replacement, Goncalo Ramos, who put in a performance reminiscent of the former Real Madrid ace himself when in his prime.

Another former Real Madrid star Pepe, also wrote his name in history as the oldest scorer (39) in the playoffs of the tournament. Changing of the guard?

Dancing in the streets because the party isn’t over yet

There will be dancing in the streets of Rabat and Marakesh long into the night as Morocoo had their finest footballing hour against Spain.

They gave them everything they could handle and from the spot, gave their fans a moment to savour. Their first quarterfinal appearance and first for the African continent in 12 years. To think Chelsea's Hakim Ziyech retired from international football following a dispute with the previous head coach. Now there is a togetherness and belief that the first African nation to make the semi-finals could be them. For all of Spain's youth, they lacked nerve from the spot.

Portugal looked a better team without Cristiano Ronaldo, their 6-1 win against Switzerland justifying his benching by head coach Fernando Santos. If Portugal want to win this tournament, Ronaldo's role might be to come on as a closer rather than being the main act.

Argentina and a lesson in Portuguese

It took some backbone from a coach and maybe some abhorrent behaviour from a star for Portugal to see their finest hour in this World Cup.

Cristiano Ronaldo is a brilliant forward to have. He kicks with both feet, he heads the ball well and he has a great eye for goal. But, he slows Portugal down and makes them fairly one-dimensional with him as the focal point as his career to date has suggested he must be. With a young gun, who is less of a target, Portugal were free to let their creativity run wild, and it did, six times, no less.

Argentina have the same problem, to a lesser extent. Lionel Messi should certainly play every minute of every game Argentina plays. But, the extent of the Argentine creativity cannot be to get Messi the ball. Doing so, will also force them into one-dimensional beings and make them, I daresay, easier to play against. The other players around Messi, and I’ve said this before, need to figure out how to just play. See Messi as just another player on the field and watch their stocks rise. Messi will still produce magic.