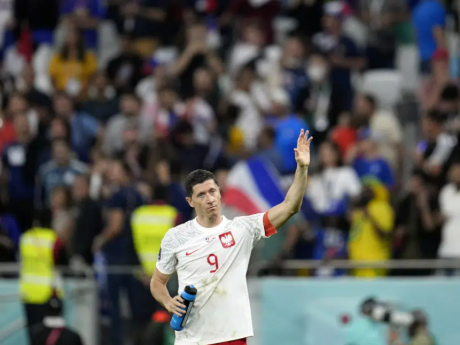 Poland's Robert Lewandowski waves after the World Cup round of 16 football match between France and Poland, at the Al Thumama Stadium in Doha, Qatar, Sunday, December 4, 2022. (AP Photo/Natacha Pisarenko)

WARSAW, Poland (AP) — Poland's prime minister on Tuesday backed down from his initial declaration to award bonuses to the national football team for it World Cup performance amid high inflation and hardship in the country.

It was a sudden reversal by Mateusz Morawiecki, who just hours earlier said he believed the players had earned some kind of a bonus by advancing from their group, Poland's best result at the tournament in 36 years.

But following controversy fuelled by high inflation and general uncertainty, Morawiecki eventually said on Facebook that “there will be no government means” for bonuses for the players.

He said that lack of sufficient financing is among the problems standing in the way of Poland's football development. He added that state money will be dedicated to amend that.

Earlier in the day he was saying that the national team, including star striker Robert Lewandowski, had earned a bonus.

At a meeting before the team left for Qatar, Morawiecki promised players a “very good reward” if things go well. Media reports said there was talk of at least 30 million zlotys ($6.7 million.)

Poland advanced from Group C after defeating Saudi Arabia, drawing with Mexico and losing to Argentina. It was then eliminated in the round of 16 by defending champion France 3-1.