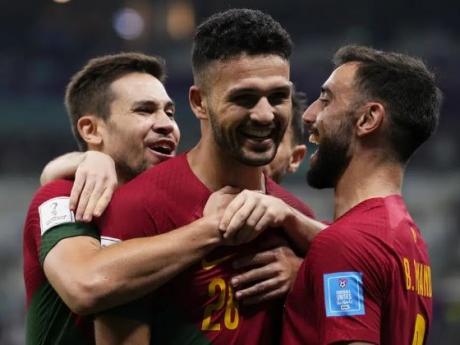 Portugal's Goncalo Ramos (centre), celebrates with teammates after scoring his side's third goal during the World Cup round of 16 football match between Portugal and Switzerland, at the Lusail Stadium in Lusail, Qatar, Tuesday, December 6, 2022. (AP Photo/Manu Fernandez)

LUSAIL, Qatar (AP) — With Cristiano Ronaldo on the bench, the superstar striker's replacement scored a hat trick to lead Portugal over Switzerland 6-1 and into the World Cup quarterfinals on Tuesday.

Goncalo Ramos, a 21-year-old forward who only made his Portugal debut last month, made his first start for his country and demonstrated the kind of clinical finishing Ronaldo was once known for.

Ramos scored the opening goal in the 17th minute and added others in the 51st and 67th — by which time chants of “RONALDO! RONALDO!” were swirling around the 89,000-seat Lusail Stadium.

Ronaldo entered as a substitute in the 72nd minute to loud cheers, though Portugal had the game wrapped up by then with defenders Pepe and Raphael Guerreiro also scoring. Rafael Leao added a late goal in stoppage time.

Portugal advanced to the quarterfinals for the third time, after 1966 and 2006, and will play Morocco on Saturday.

Portugal coach Fernando Santos now has to decide whether to stick with Ramos or restore Ronaldo, the top scorer in men's international football and one of the game's greatest-ever players.