Knight-Wisdom to have surgery on injured knee 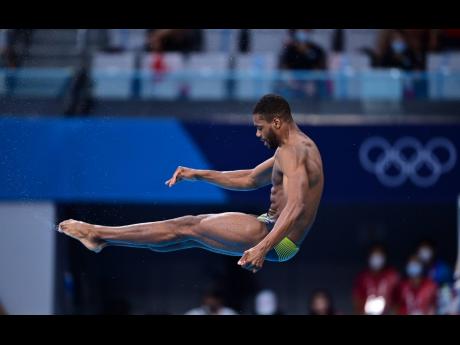 Jamaican diver Yona Knight-Wisdom is set to have surgery today on his left knee after ultrasound results showed he had ruptured rectus femoris tendons in the knee. The injury, which occurred at the Scottish National and Open Diving Championships...

Jamaican diver Yona Knight-Wisdom is set to have surgery today on his left knee after ultrasound results showed he had ruptured rectus femoris tendons in the knee.

The injury, which occurred at the Scottish National and Open Diving Championships last weekend, will keep the Olympian out of competition for the next three to four months. However, it will not keep him out of the pool totally as he will be able maintain some form of training until he is fully recovered.

“I went into the hospital for an ultrasound and they told me there is a 50 per cent rupture in the rectus femoris tendons, which could have been worse because it could have been a 100 per cent. It is not ideal but it is not terrible,” Knight-Wisdom told The Gleaner.

Knight-Wisdom, who was hoping to avoid surgery, said after a conversation with a surgeon, surgery was recommended and although he was given a few days initially, the opportunity came for it to be done today.

“He (surgeon) was able to get me in tomorrow (Tuesday). So I will be going in tomorrow morning once there are no major delays. It is very fortunate because for an injury like this, the sooner it can be done the better,” he added.

The recovery time for Knight-Wisdom is approximately three to four months. However, he believes that is adequate time to get prepared for the Aquatics World Championships next July.

During his road to recovery, he will also continue with training not involving his left leg.

“From what I anticipate, it gives me time over the summer to get prepared for the World Championships which is pretty much what I expected.

“I will be out of normal diving but there is still a lot that I can do. I still should be able to train relatively frequently, just not using my left leg. I know I will get back (fully) at some point.

“But the aim over the next few months is to not lose too much in all the other areas, so when I start working my left leg I can put my energy into that. Hopefully, all the other areas will be maintained as best as possible. So that when I do come back, I do not fall too far behind,” he pointed out.

The 27-year-old has also been looking into life after diving and will use some of his time away from the pool to delve a little further into those interests.

Nevertheless, he expects to come back as strong as ever.

“It is just another process I have to go through. Such is life and in such a sport. It is not always easy and I have had an easy ride over the last 10 years. But when I get back, as long as I have confidence in my knee and it is strong enough, I don’t think it will take me too long to get back to normal,” he said.