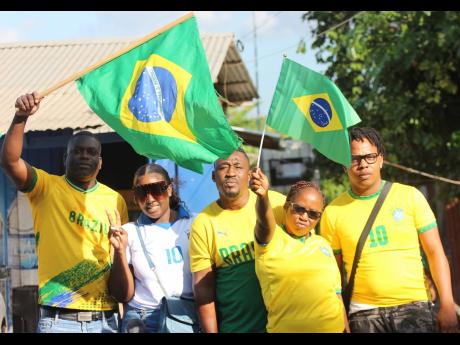 Aunties Hot Spot on the Old Harbour Bay main road was abuzz with excitement yesterday as throngs of Brazilian supporters came out to witness their team book a place in the quarterfinals of the 2022 FIFA World Cup in Qatar.

The ardent fans celebrated as Vinicius Junior, Neymar, Richarlison and Lucas Paqueta notched goals to seal a 4-1 win for Brazil over South Korea, who got a late consolation from Seung-Ho Paik.

The win convinced the Old Harbour Bay fans that Brazil are the real deal, with the Samba nation now firm favourites to go all the way.

“Brazil is the side for the World Cup because we have the best ballers in the tournament right now. No side in the World Cup can beat Brazil right now,” said Claude.

The five-time World champions dominated the contest and sealed the deal from the first half before taking their foot off the accelerator for the second stanza, which allowed the South Koreans to come back with a goal in the 76th minute.

Despite conceding, Sheldon Campbell, aka ‘Balla Bwoy’, believes the Brazilian performance showed that they are a championship side.

“Brazil tek dem foot off the gas and mek South Korea come back, but my side is the real deal but next match a go be different football. Brazil ready, cause a fi dem time because we have a complete side.”

The female Brazilian supporters were not to be left out as Googie was elated that the ‘Selecao’ were able to bounce back from their defeat against Cameroon to book their place in the quarterfinals.

“I am overwhelmed and I have no doubt that my team can go all the way after a performance like this. We are born champions and we are winners. The whole of Old Harbour Bay a seh Brazil and all the way to Trench Town. I see a Brazil and England final.”

The Brazilians will next face Croatia on Friday in the quarterfinals starting at 10 a.m. local time.