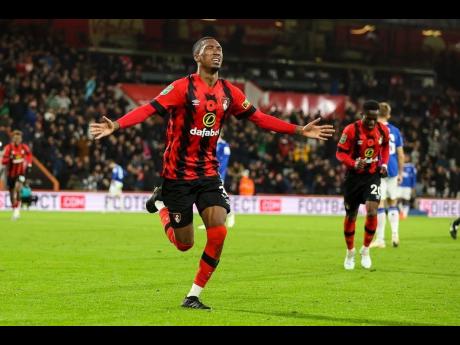 TALENTED BOURNEMOUTH winger Jaidon Anthony has slowly been making a name for himself in the English Premier League (EPL) this season.

Though not a regular starter, Anthony has impressed with his two goals in 10 EPL games so far.

Although not yet on the radar of the Reggae Boyz, the former Arsenal youth player who played in the same youth teams as Emile Smith-Rowe and Bukayo Saka but wasn’t given a senior contract by the London club as he was deemed too small, has caught the eye with some outstanding performances this season.

However, the budding star, whose parents are Jamaican, insists he is in no haste to decide his international future.

“My mum and my dad are both from Jamaica as well. I have got good heritage from there,” Anthony told the Beautiful Game Podcast.

“It would be an honour to represent either (England or Jamaica),” he said.

Anthony’s Bournemouth teammates Jamal Lowe plays for the Reggae Boyz and he revealed that Lowe is always at him to come play for the Caribbean team but he contends he will continue to bide his time.

“One of my teammates, Jamal Lowe, plays for Jamaica. He’s always saying you need to come! I have only been playing professional football for two years. I don’t want to rush any decisions. We will see what happens,” he commented.

Despite being a very bright talent, Arsenal closed its doors on Anthony at age 16.

The London club released him to Bournemouth and he has gradually fought his way back to the Premier League to prove a point, hopefully against the club that broke his heart.

During last season’s qualification run to the Premier League from the Championship, Bournemouth manager Scott Parker commented on Anthony after a string of impressive performances.

“He’s shown good quality ... he’s got his opportunity and at this present moment he’s taken it. Every bit of me suggests that this boy has got a key role to play.”