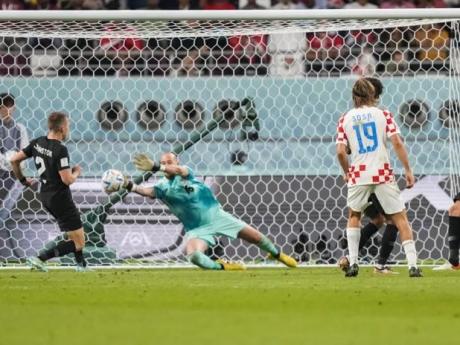 DOHA, Qatar (AP) — The Croatian and Serbian football federations were fined by FIFA on Wednesday for making Balkan political statements at the World Cup.

The Serbian football federation was fined 20,000 Swiss francs ($21,300) for a political banner about neighbouring Kosovo displayed in the locker room before playing Brazil in the team's opening game.

It showed a map of Serbia that included the territory of its former province, which has been an independent state for nearly 15 years, and the slogan “No Surrender.”

The Kosovo football federation formally complained to FIFA about the banner, which was hung over two Serbia players' lockers on November 24.

FIFA said the charge against Croatia related to “use of words and objects to transmit a message that is not appropriate for a sports event.”

Borjan was born in an ethnic Serbian region of Croatia. He and his family left their hometown in 1995 when it was taken by Croatian forces. The ethnic Serbs are said to have fled on tractors.

During Canada's 4-1 loss on November 27, one banner displayed by Croatia fans used a flag of tractor manufacturer John Deere and changed the marketing slogan to target Borjan.