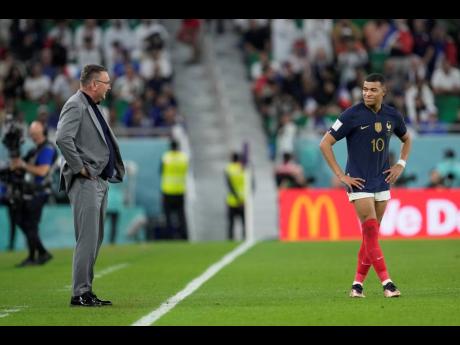 AP
Poland’s head coach Czeslaw Michniewicz looks across at France’s Kylian Mbappe during their World Cup round of 16 football match at the Al Thumama Stadium in Doha, Qatar, on Sunday. 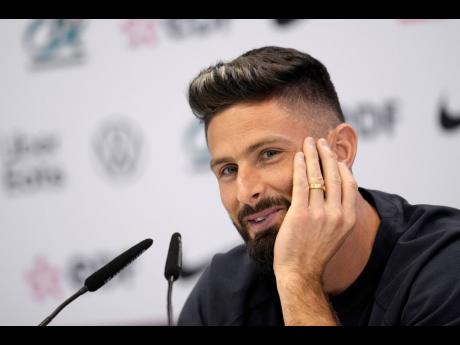 That’s fine with the 36-year-old veteran, who said yesterday he is having fun with the man he described as the best striker he has ever played with.

“I think we still have not seen the best of Kylian,” Giroud said of the 23-year-old Mbappé, who has scored a tournament-leading five World Cup goals in Qatar.

“I hope (his best) is going to come soon and he will beat all the records,” Giroud said. “He is amazing and he is still young, which is scary because he still can improve his game.”

Giroud has scored three goals at this year’s World Cup, including the opening strike in the 3-1 win over Poland in the round of 16 on Sunday. That was his 52nd for France, lifting him out of a tie with Thierry Henry for the national team’s scoring record.

That record is only 19 goals ahead of Mbappé.

“So, I know that, you know (that), also,” Giroud said at the France training camp before turning his attention to Saturday’s quarterfinal match against England.

“It will be a nice game to watch, I think. They have so many great players, the young generation, like us,” the former Arsenal and Chelsea forward said.

“I think they have quality but quantity also in the squad, so they have different options.”

The match has a strong flavour of the Premier League, with Tottenham goalkeeper Hugo Lloris set to make a record 143rd appearance for France.

“We were talking with Hugo and each other, regarding this game and we said, ‘Yeah, we do not want to lose against England’,” said Giroud, who now plays for Italian champion AC Milan. “That is a special game for us.”